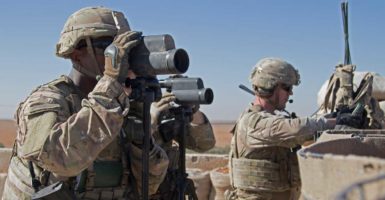 President Donald Trump signaled a major shift in U.S. policy on Syria with a short tweet on Wednesday: “We have defeated ISIS in Syria, my only reason for being there during the Trump Presidency.”

We have defeated ISIS in Syria, my only reason for being there during the Trump Presidency.

The president subsequently tweeted that it was time for U.S. troops to come home and that this should not be a surprise in light of his campaign promises to reduce U.S. military involvement in the Middle East.

Bringing the troops home for Christmas and fulfilling campaign promises are laudable goals, but the administration must be careful not to do this at the expense of long-term U.S. security interests in Syria and the Middle East.

The president’s announcement appeared to contradict the recent statements of numerous senior officials about maintaining a limited U.S. military presence (estimated at a little more than 2,000 troops) in eastern Syria. These troops would be used to train local security forces to prevent ISIS from resurging and gain leverage for reaching an acceptable negotiated settlement for Syria’s multiple conflicts that would limit Iran’s hostile influence.

It is unclear why Trump appears to be downgrading these stated goals.

This reportedly was not an impulsive decision but one the president had been mulling for many weeks, according to administration officials.

Pentagon spokeswoman Dana White stated Thursday that the campaign against ISIS is not over: “We have started the process of returning U.S. troops home from Syria as we transition to the next phase of the campaign.”

But it is unclear what the “next phase” will entail.

The abrupt shift in Syria policy surprised many of the administration’s allies on Capitol Hill.

Sen. Lindsey Graham criticized the decision as “a huge Obama-like mistake,” comparing it to President Barack Obama’s decision to withdraw U.S. troops from Iraq in 2011, which contributed to the rise of ISIS by 2014.

Sen. Marco Rubio blasted the withdrawal on Twitter as “a grave error with broader implications beyond just the fight against #ISIS.”

Both senators undoubtedly felt blindsided by the casual announcement of such a significant policy alteration in a tweet, as did many U.S. allies.

But it difficult to accurately assess the change in policy until the details of the administration’s plans are spelled out.

The key question is not whether to withdraw U.S. troops or not. The U.S. inevitably will have to withdraw at some point.

The real question is what arrangements have been made to protect U.S. national interests on a number of fronts after troops are withdrawn?

Those interests include permanently defeating ISIS, which the administration correctly has made its top priority.

But the U.S. also has an interest in ensuring the security of allies such as Israel, Jordan, Turkey, and Iraq; minimizing Iranian influence; preventing another wave of Syrian refugees; and creating positive conditions for the return of millions of refugees who have already fled Syria.

If the Trump administration has made arrangements with other powers to offset the departure of U.S. troops, those understandings could help reduce the risks inherent in a U.S. withdrawal.

France reportedly will maintain its roughly 1,000 troops in eastern Syria, for example, but it is unclear if the U.S. will continue to provide air support for those and other allied forces.

Trump also may have reached an understanding with Turkish President Recep Tayyip Erdogan, who long has threatened to launch a military campaign against Syrian Kurds, including some recruited by the U.S. who have been the most effective local fighters against ISIS.

Turkish officials claimed that Trump’s pivot on Syria policy came in response to a telephone conversation on Tuesday with Erdogan, which resulted in a decision to withdraw American troops within 100 days.

It remains unclear what agreements, if any, have been reached with Turkey to ensure the enduring defeat of ISIS. The risks of a sudden U.S. withdrawal could be mitigated if it is part of a broader strategy to improve strained relations with Turkey, secure a stronger Turkish military commitment to fighting ISIS, and defuse tensions between Turkey and Syrian Kurds.

If Turkey has agreed to step in to replace U.S. troops attacking ISIS with Turkish troops, then that could be a positive step, particularly if Syrian Kurds can be included in some sort of trilateral understanding similar to the arrangement Washington helped broker between Turkey and Iraqi Kurds.

But if there is no agreement with Turkey on the role of Syrian Kurds, then a U.S. pullout could lead to a Turkish-Syrian Kurdish war, which will divert Kurdish forces from continuing the military campaign against ISIS.

Unless the administration has developed an effective exit strategy, there also is a danger that an accelerated U.S. troop withdrawal will negatively impact Syria’s kaleidoscopic political dynamics, pushing Syrian Kurds into the arms of Russia and Syria’s Assad regime, while reducing the chances that Syria’s Sunni Arabs will emerge from the intimidating shadow of ISIS.

Such an outcome would pave the way for an ISIS resurgence, as it did after U.S. troops were withdrawn from Iraq.

The Trump administration must do a better job in explaining the details and anticipated benefits of its policy shift on Syria.

Absent such a policy rollout, there is a growing danger that many of the administration’s supporters will join the stampede of critics who have jumped to the conclusion that Russia, Iran, ISIS, the Assad regime, and Turkey will be the principal beneficiaries of Trump’s new Syria policy.