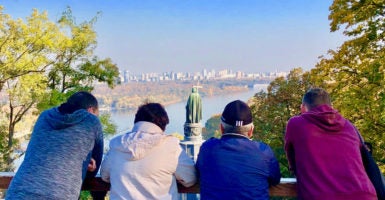 A monument to Volodymyr the Great in central Kyiv, with the Dnieper River in the background. (Photo: Nolan Peterson/The Daily Signal)

KYIV, Ukraine—At the end of the workday on Oct. 17, a rush-hour flood of pedestrians exited the funicular at the top of central Kyiv’s Volodymyrska Hill and passed by the gates of St. Michael’s Golden-Domed Monastery.

It was a clear day and sunlight illuminated the golden roofs of the belltower and main cathedral. There has been a monastery on this site since 1108, but the buildings there today are a careful reconstruction of what the Soviets demolished in 1937.

The monastery was officially reopened in 1999, eight years after Ukraine’s independence following the breakup of the USSR in 1991. And on this sunny fall day in October, Ukraine was less than one week removed from another historic milestone of independence from Russia. 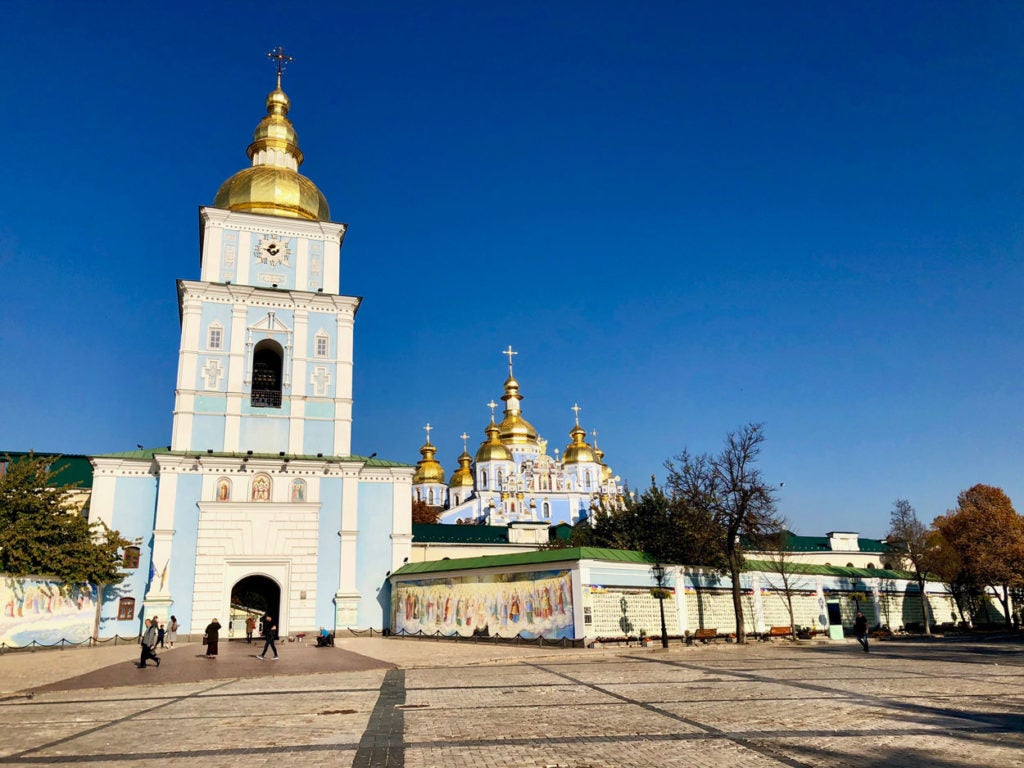 St. Michael’s Golden-Domed Monastery in Kyiv today is a careful reconstruction of what the Soviets demolished in 1937. (Photo: Nolan Peterson/The Daily Signal)

On Oct. 12, the Ecumenical Patriarchate of Constantinople, historically the guiding body of the global Orthodox Church, confirmed plans to grant the Ukrainian Orthodox Church full independence, or autocephaly, removing it from control of the Russian Orthodox Church in Moscow for the first time since 1686.

Two breakaway Ukrainian churches had formed in the 1990s following Ukraine’s independence from the Soviet Union, but the Constantinople Patriarchate never officially recognized the Ukrainian splinter churches as legitimate and independent from Moscow.

Thus, religious independence from Moscow is a historic breakthrough for Ukraine, marking a decisive and pivotal step forward in its ongoing cultural divorce from Russia that dates to the 2014 pro-Western revolution.

Yet, on Oct. 17,  you wouldn’t have known anything had changed. Inside the cathedral of St. Michael’s Golden-Domed Monastery, a few people whispered prayers and lit candles.

Outside the iron fence demarking the monastery’s grounds, the rush-hour crowds streamed by. Most had their heads down, looking at a smartphone. A woman played an outdoor piano set up before the monastery’s gates. From time to time, someone would stop and listen.

Then, the woman at the piano began playing “Imagine,” by John Lennon. She only played the melody, but a few notes into the song a young woman stopped before the piano and started singing along. And then another person joined in, followed by another, and another. 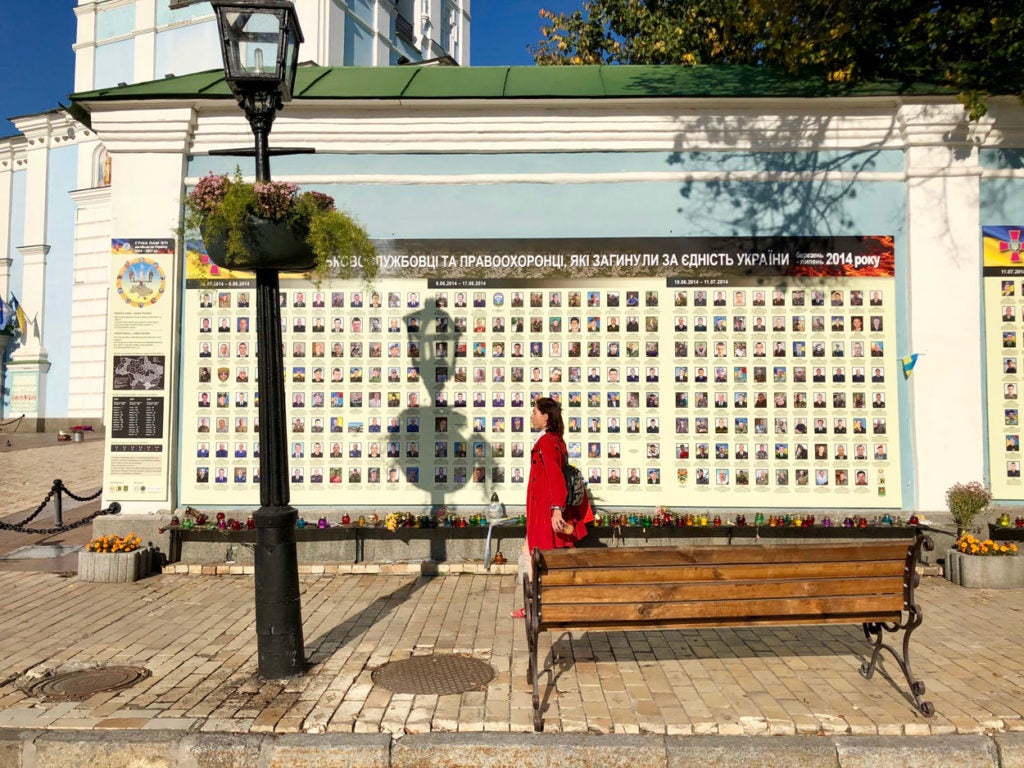 Photos of fallen Ukrainian soldiers—reminders of an ongoing war in the country’s east that has so far killed more than 10,300 people.

If you’ve lived in Ukraine long enough, then, with a little luck, you encounter such scenes from time to time in your daily wanderings. Such as on Saturday, when Ukraine’s historic religious divorce from Russia came to fruition. If you happened to be there, it was an exceptional moment to witness.

That day, a Church Unification Council, or Sobor, was held at the 11th-century St. Sophia’s Cathedral in central Kyiv to elect the head of the unified Ukrainian Orthodox Church.

Of note: Ten bishops of the Ukrainian Orthodox Church of the Moscow Patriarchate confirmed participation in Saturday’s unification council—each bishop came with a priest and a laity member, totaling 30 delegates.

As the day wore on, the scene on the square outside the cathedral underscored the historic importance of events inside.

Despite the subzero temperatures, thousands gathered to celebrate. Nearby streets were shut down. There were songs and speeches. Veterans of both the 2014 revolution and the ongoing war celebrated with a unique degree of pride—this was, after all, a rare, tangible victory after years of stalemated war and frustratingly slow post-revolutionary progress.

Then, around 5 p.m., the cathedral’s bells rang, announcing a decision had been made. The crowd cheered.

“We have managed to unite the three branches of Ukrainian Orthodoxy into a single national Orthodox Church. The doors of our church are open for everyone,” Epiphanius said after the unification council, addressing the joyful crowds.

For his part, Poroshenko emerged from the cathedral with a landmark political victory in hand.

“This day will go into history as a sacred day … the day of the final independence from Russia,” Poroshenko said following the unification council. “And Ukraine will no longer drink, in the words of Taras Shevchenko, ‘Moscow’s poison from Moscow’s cup.’”

Ukrainians have long seen religion as one of Russia’s weapons.

For his part, Epiphanius, the newly minted head of the unified Ukrainian Orthodox Church, wrote in a December 2015 article that the Kremlin had exploited “units of the Moscow Patriarchate in Russia and abroad to implement its own domestic and foreign policy.” 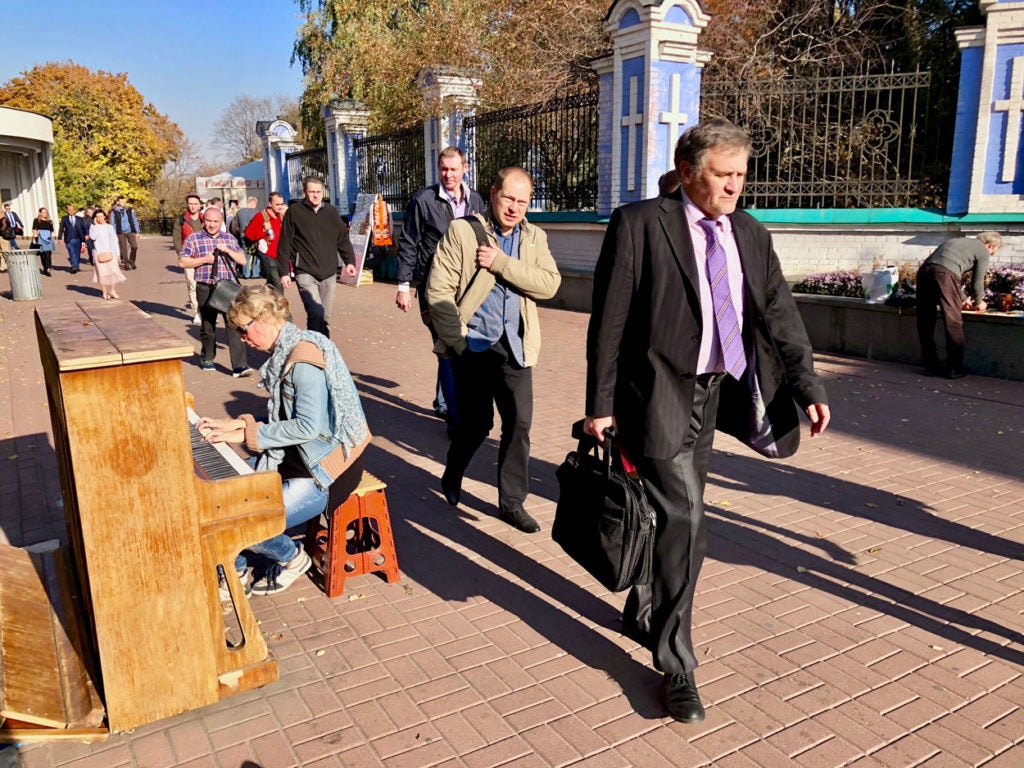 A piano player near St. Michael’s Golden-Domed Monastery in Kyiv.

“By using the Russian Orthodox Church as an instrument of state power in its conflict with Ukraine, the Kremlin galvanized a Ukrainian campaign for independence, or ‘autocephaly,’ for the Ukrainian Orthodox Church,” Charles North, senior adviser for the U.S. Institute of Peace focusing on Ukraine and Russia, wrote on Dec. 11.

Even in Kyiv, the Russian Orthodox Church has been accused of pro-Russian activities.

“This is a church without Putin,” Poroshenko said on Saturday, underscoring the contemporary geopolitical context of the historic religious milestone. “What kind of church is this? It is a church without prayers for the Russian government and Russian military.”

Moreover, the Moscow Patriarchate stands to lose up to one-third of its parishes, dimming Russia’s influence over other Eastern Orthodox countries.

“We support Ukrainians’ ability to worship as they choose and hope this will be respected by all,” U.S. Secretary of State Mike Pompeo said in an Oct. 18 statement about Ukraine’s religious independence from Russia.

Most Ukrainians support the split, but not by an overwhelming margin, according to an October poll by the Rating sociological group, a Ukrainian research agency. About 54 percent of Ukrainians were in favor of autocephaly, or independence, from the Moscow church, with roughly 19 percent opposed. The remainder were indifferent, the poll found.

Some outside observes say the historic religious divorce could upheave the uneasy military status quo between Russia and Ukraine, especially in the wake of a Nov. 25 naval confrontation in the Black Sea, which nearly escalated the ongoing land war in the Donbas into a much bigger conflict.

“There was and still is a threat of invasion of Russian armed forces into the sovereign territory of Ukraine, and we certainly should be prepared for this,” Poroshenko reportedly said on Sunday.

Russia invaded and seized Ukraine’s territory of Crimea in early 2014. Then, Russian military and intelligence forces engineered a hybrid war in Ukraine’s eastern Donbas region throughout the spring and early summer of 2014. That August, Russian regular military units entered the war outright. 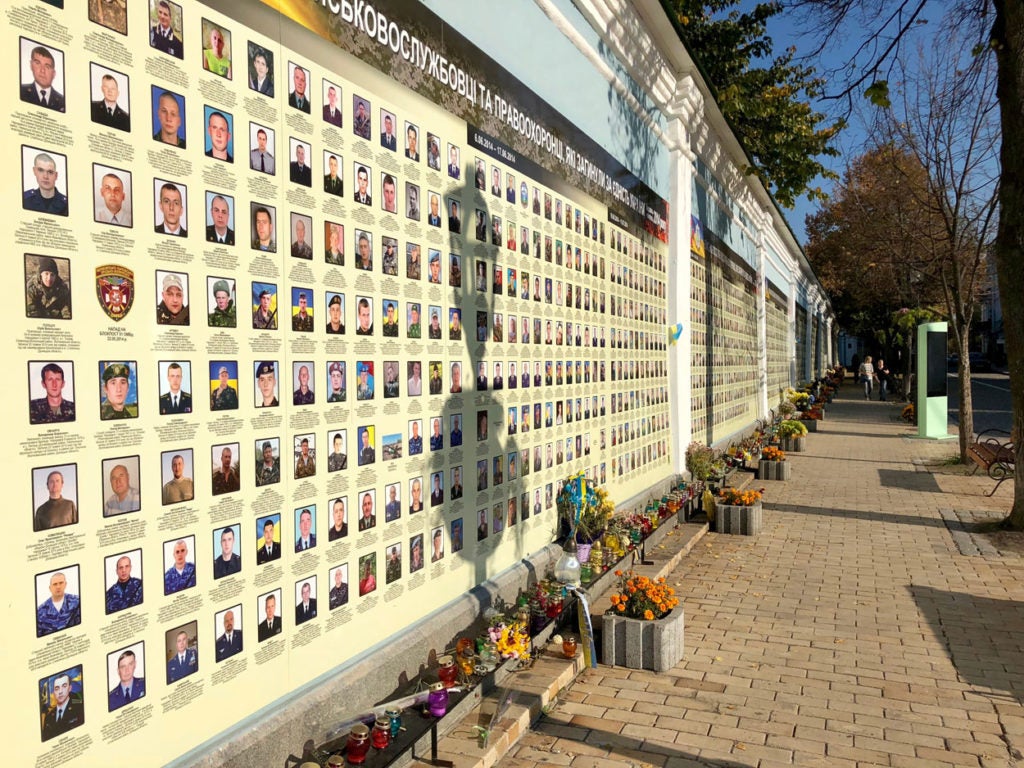 Pictures of fallen soldiers outside the perimeter wall of St. Michael’s Golden-Domed Monastery in Kyiv.

For its part, Moscow continues to deny its involvement in the war, painting the conflict as a civil war.

After more than four and a half years, the war in Ukraine’s embattled Donbas region is a static, trench combat stalemate mainly fought at a distance by artillery and snipers. So far, more than 10,300 Ukrainians have died and the slow trickle of civilian and military deaths continues. On Saturday, the day of Ukraine’s religious unification council, a sniper reportedly killed a Ukrainian soldier in the Donbas war zone.

Amid the fanfare outside of St. Sophia’s Cathedral on Saturday, another scene, just about a five minute walk away on Mykhailivs’ka Square, underscored the ongoing war’s toll. There, the photos of thousands of fallen Ukrainian soldiers cover the perimeter wall of St. Michael’s Golden-Domed Monastery.

On that blustery winter’s day, a woman sat alone and crying on a bench before the wall and all its photos. She was old and wore a headscarf over her grayed hair. One hand held a handkerchief to wipe away her tears. With her other hand she gave the sign of the cross.