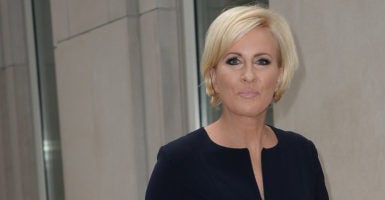 “The term is crass and offensive and I apologize to everyone, especially the LGBTQ community and to my colleagues for using it,” Mika Brzezinski says of calling Secretary of State Mike Pompeo a “wannabe dictator’s butt boy.” (Photo: Kristin Callahan/ACE Pictures/Newscom)

“I wanted to address a term that I used on this show on Wednesday that was vulgar. I knew it right away and I tweeted that it was a terrible choice of words and that I was sorry. But please allow me to say this face-to-face,” Brzezinski said.

“The term is crass and offensive and I apologize to everyone, especially the LGBTQ community and to my colleagues for using it,” she continued. “It was a mistake. My father would have found it so unbecoming and disrespectful and he would have told me. I will work hard to be better. But I just wanted to say on camera, looking the viewers straight in the eye, I am really, really sorry.”

Brzezinski was discussing the murder of Saudi journalist Jamal Khashoggi during Wednesday’s broadcast when she began mocking Pompeo.

“Why doesn’t Mike Pompeo care right now?” she asked. “Are the pathetic deflections that we just heard when he appeared on ‘Fox and Friends,’ is that a patriot speaking or a wannabe dictator’s butt boy? And I’m dead serious, I’m asking, are these the words of a patriot?”

Brzezinski tweeted out her apology Wednesday and also apologized to her guest, Democratic Sen. Dick Durbin of Illinois.

Totally agree with you -SUPER BAD choice of words .. I should have said “water boy”… like for football teams or something like that.. apologize to @SenatorDurbin too! SO SORRY! https://t.co/zIqsGdK3Tk

President Donald Trump tweeted about the incident Thursday and predicted Brzezinski would be given a pass.

If it was a Conservative that said what “crazed” Mika Brzezinski stated on her show yesterday, using a certain horrible term, that person would be banned permanently from television….

….She will probably be given a pass, despite their terrible ratings. Congratulations to @RichardGrenell, our great Ambassador to Germany, for having the courage to take this horrible issue on!