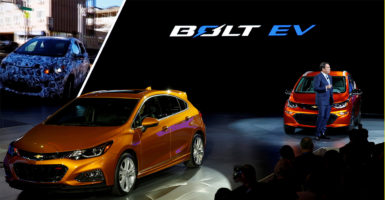 If America’s auto manufacturers wrote letters to Santa, it’s not hard to guess what would be high on their lists: retaining the federal tax credit for electric vehicles.

For several years now, Uncle Sam (who often acts like Santa’s U.S.-based cousin) has tried to encourage the public to buy electric vehicles by offering those who do so a tax credit of up to $7,500.

But the credit wasn’t created to be available forever, and it already caps out when a manufacturer has sold 200,000 electric vehicles.

General Motors Co., which is more than happy to have taxpayer money propping up part of its business, wants the credit made permanent and the cap lifted. So do other auto manufacturers, such as Nissan and Tesla. Many lawmakers on both sides of the aisle seem more than happy to give them what they want.

Guess who isn’t? President Donald Trump. When General Motors recently announced plant closings and a 15 percent cut in its workforce, the president said he was “looking at cutting all GM subsidies, including for electric cars.”

As well he should. Government has no business interfering in the market and trying to push consumers to buy what they don’t want. And it’s even more galling when lawmakers use taxpayer money to do it.

This type of cronyism is bad enough on principle alone. But it gets worse in the case of electric vehicle tax credits.

For one thing, the cost is borne disproportionately by lower- and fixed-income families who can’t afford electric vehicles. Who’s taking advantage of the subsidies? Primarily America’s wealthiest households. They don’t need a tax break to afford an electric vehicle, but hey, if it’s there, they’ll take it.

So, in an ironic twist, we have the government taking money from a wide swath of Americans, including those on the low end of the income scale, to put those who are more well off into “green” vehicles.

Auto manufacturers, like any other company, should base their decisions about what to make solely on what customers want—not on what government wants them to want.

If people want electric vehicles, fine. But it should be their free choice, not something they purchase because they get some “free” money.

But some people may say it’s worth it for the environmental benefit. “Switching to electric cars is key to fixing America’s ‘critically insufficient’ climate policies,” The Guardian wrote earlier this year. That’s the rationale the Obama administration used to justify its push for electric vehicles.

But as economist Nicolas Loris points out in a recent article, “the numbers tell a different story.” In a study published in May, the Manhattan Institute calculated the reductions in greenhouse gas emissions from increased adoption of electric vehicles. The bottom line? Yes, electric vehicles reduce emissions, but in amounts far too small to make a difference.

“Based on the [Energy Information Administration’s] projection of the number of new electric vehicles, the net reduction in carbon dioxide emissions between 2018 and 2050 would be only about one-half of 1 percent of total forecast U.S. energy-related carbon emissions,” the report reads. “Such a small change will have no impact whatsoever on climate.”

Plus, let’s keep in mind that the mining of materials for lithium-ion batteries for electric vehicles itself pumps out a lot of carbon emissions. Add in the fact that the electricity being used to recharge these batteries is manufactured in coal-powered plants.

The auto manufacturers may disagree, but I have a better wish for Santa: End the electric vehicle credit and other forms of corporate welfare. Let the people decide what they want to buy without Uncle Sam putting his thumb on the scale.