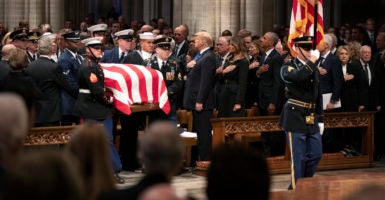 George H.W. Bush came close to dying young twice, first as a teen from a staph infection and then as a Navy fighter pilot in World War II.

But the nation’s 41st president managed to “die young as old as possible,” his son and the 43rd president, George W. Bush, said in a eulogy Wednesday, remarking on his father’s active final years.

The three other living former presidents, joined by President Donald Trump as well as other current and former world leaders, gathered at Washington National Cathedral for a state funeral service for Bush, who died late Friday at 94.

During a moving and sometimes humorous eulogy, the younger Bush spoke of the family’s loss of his sister Robin, who died at 3 years old, as well as his mother, former first lady Barbara Bush, who died in April in the 73rd year of the couple’s marriage.

“Through our tears, let us know the blessings of knowing and loving you, a great and noble man, the best father a son or daughter could have,” Bush said, choking up at the end of his remarks. “Dad is hugging Robin, and holding Mom’s hand again.”

The congregation erupted in applause for the only time during the funeral service as Bush strode back to his seat, past his father’s flag-draped casket.

The younger Bush earlier recalled the final exchange between father and son, which took place over the phone.

“I said, ‘Dad, I love you and you’ve been a wonderful father.’ And the last words he would ever say on earth were ‘I love you, too.’”

The other Bush siblings—Jeb, Neil, Marvin, and Doro—listened to their brother from a front pew, where the 43rd president and his wife Laura also sat until he stood to deliver his eulogy.

“When the history books are written,” the son said, “they will say that George H.W. Bush was a great president of the United States, a diplomat of unmatched skill, a commander in chief of formidable accomplishment, and a gentleman who executed the duties of his office with dignity and honor.”

That life of accomplishment in part may have occurred because George H.W. Bush sought to prove himself worthy after he was spared from death during World War II and his crew mates weren’t, presidential historian and Bush biographer Jon Meacham said in his own eulogy.

“His life code, as he said, was: Tell the truth. Don’t blame people. Be strong. Do your best. Try hard. Forgive. Stay the course,” Meacham said.

Buttressing the 41st president’s place in history, Meacham called him a “20th-century founding father” and compared him to the 16th president.

“Abraham Lincoln’s ‘better angels of our nature’ and George H.W. Bush’s ‘thousand points of light’ are companion verses in America’s national hymn,” he said. “For Lincoln and Bush both called on us to choose the right over the convenient, to hope rather than to fear, and to heed not our worst impulses but our best instincts.”

Bush, in a single term from 1989 until 1993, presided over the collapse of the Soviet Union, the end of the Cold War, the fall of the Berlin Wall, and the reunification of Germany. He led a large, international coalition in Operation Desert Storm to push Iraq’s invading forces out of neighboring Kuwait.

Former Canadian Prime Minister Brian Mulroney, a friend since their times as national leaders, said Bush’s coalition of nations would rank among the “most spectacular and successful” foreign policy achievements ever.

In 50 or 100 years from now, as historians review the accomplishments in the context of all who have served as president, I believe that it will be said that in the life of this country, the United States, which is in my judgment the greatest democratic republic that God has ever placed on the face of this earth, I believe it will be said that no occupant of the Oval Office was more courageous, more principled, and more honorable than George Herbert Walker Bush.

After praising Bush’s character, including his modesty, Simpson added to much laughter: “Those that travel the high road of humility in Washington are not bothered by heavy traffic.”

The priest also referred to Bush’s 1988 campaign slogan about shaping a “kinder, gentler nation” and linked it to his Christian faith.

“My hunch is that heaven, as perfect as it must be, just got a bit kinder and gentler, leaving behind that hole for me and you to fill. How? Preach Christ at all time. If necessary, use words,” Levenson said, adding, “So, Mr. President: Mission complete.”

The body of the 41st president will be flown back to Houston to lie in repose at St. Martin’s Episcopal Church before a private funeral service there Thursday. A train then will carry the casket 97 miles northwest to the George H.W. Bush Presidential Library and Museum at Texas A&M University in College Station, for the former president’s burial alongside Barbara Bush and their daughter Robin.