When Federalism and a Law Against Female Genital Mutilation Collide 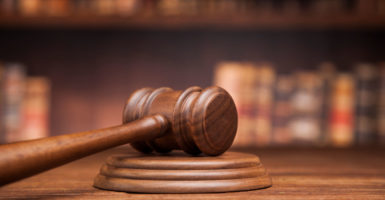 If Congress can prohibit even local, non-economic crime, then our federal government is many things, but it isn’t “limited.” (Photo: Ingram Publishing/Newscom)

A federal district court recently invoked constitutional principles of federalism to invalidate a federal criminal statute in a case that involves a grisly crime—female genital mutilation.

Congress can amend this statute, whether or not the government appeals the case—and perhaps it should, but not without clarifying the reach of the statute.

That’s because, if Congress can prohibit even local, non-economic crime, then our federal government is many things, but it isn’t “limited.”

The case involves four individuals who performed, or helped to perform, female genital mutilation, and four mothers who brought their daughters to a clinic in Livonia, Michigan, to be victimized by it. There are nine victims from Michigan, Illinois, and Minnesota.

The defendants seek to have the charges dismissed, however, arguing that Congress did not have constitutional authority to enact the relevant federal statute.

Though the defendants’ deeds were wrong, their legal arguments may not be. (Rest assured, 27 states already ban female genital mutilation, and these procedures likely could be prosecuted under existing laws in other states.)

Congress can only legislate within its enumerated powers, and the only potential sources of authority in this case—the Commerce Clause and the Necessary and Proper Clause, together with the Treaty Clause—may not be availing.

The Necessary and Proper Clause authorizes Congress to enact legislation “for carrying into Execution” its other powers that are enumerated in the Constitution.

In this case, the government argued that Congress’ ban on female genital mutilation  carries into execution its authority under the Treaty Clause, which provides that the president “shall have Power, by and with the Advice and Consent of the Senate, to make Treaties, provided two-thirds of the Senators present concur … .”

Congress can enact laws that effectuate a treaty, the court wrote, but only “to the extent that the two are rationally related.”

The relevant treaty here is the International Covenant on Civil and Political Rights, ratified in 1992.

In part, it requires signatories to “ensure the equal right of men and women to the enjoyment of all civil and political rights set forth in the present Covenant” and provides that “[e]very child shall have, without any discrimination … the right to such measures of protection as are required by his status as a minor, on the part of his family, society and the State.”

The government argued that Congress’ prohibition against genital mutilation of female minors effectuates those treaty obligations.

The court pointed to two official statements regarding ratification of the treaty. One, from the Senate Committee on Foreign Relations, states “this Convention shall be implemented by the Federal Government to the extent that it exercises … jurisdiction over the matters covered therein.”

The other is from the administration of President George H.W. Bush, stating “there is no intent to alter the constitutional balance of authority between the State and Federal governments or to use the provisions of the Covenant to ‘federalize’ matters now within the competence of the States.”

“Congress may not enact” a statute prohibiting these procedures, the court wrote, because “the clearest example of traditional state authority is the punishment of local criminal activity.”

“This division of authority between the federal and state governments [must] be respected,” the court continued, “No treaty and no statute enacted to implement a treaty may upset this balance.”

Justice Clarence Thomas previously questioned the scope of Congress’ authority under the Treaty Clause in his concurring opinion in Bond v. United States (2014). That case involved the federal prosecution of a minor assault—where the defendant tried to poison her husband’s mistress—under an international chemical weapons treaty.

Thomas wrote that interpreting the Treaty Clause to reach “every conceivable domestic subject matter—even matters without any nexus to foreign relations—would destroy the basic constitutional distinction between domestic and foreign powers” and would also “circumvent the role of the House of Representatives in the legislative process.”

Those arguments might take center stage if this case eventually reaches the Supreme Court.

Does female genital mutilation fall within the Commerce Clause’s provision that “Congress shall have power to … regulate Commerce … among the several States”?

Historically, Congress’ commerce power allowed the federal government to prevent states from enacting protectionist tariffs that would restrict trade among the states—not to authorize Congress to regulate all commercial activity.

But with the Supreme Court’s expansion of the clause in Wickard v. Filburn (1942) to allow Congress to regulate commerce that has a “substantial relation to interstate commerce,” for many years, there seemed to be few limits on this power.

Then, in United States v. Lopez (1995), the high court ruled that the Commerce Clause did not authorize Congress to enact a federal statute prohibiting gun possession near schools. The court refused to say “that there never will be a distinction between what is truly national and what is truly local.”

Then, in United States v. Morrison (2000), it said the same of a law that provided a federal cause of action for sexual-assault victims.

The Supreme Court rejected “the argument that Congress may regulate noneconomic, violent criminal conduct based solely on that conduct’s aggregate effect on interstate commerce.”

In both Lopez and Morrison, a majority of the justices were unwilling to sit back and allow Congress to expand its power when the activities Congress sought to regulate were well within the states’ police power to legislate morals, health, and safety.

In terms of the commerce power, Friedman found the female genital mutilation law indistinguishable from the criminal laws in Lopez and Morrison that exceeded Congress’ authority.

The court held that no “rational basis exists” for concluding that the activity being regulated “substantially affect[s] interstate commerce.”

The regulated activity is not economic in nature, the court reasoned. It “is a form of physical assault”; the activity has no effect on interstate commerce; and no “market exists for FGM beyond the mothers of the nine victims alleged” in this case.

The court also looked to the statute and found nothing to limit its reach “to a discrete set of activities that has an explicit connection with, or effect on, interstate commerce,” such as a requirement to prove that a party crossed state lines or had some demonstrable effect on interstate commerce.

“As despicable as this practice may be,” the court concluded, “FGM is ‘local criminal activity,’ which, in keeping with longstanding tradition and our federal system of government, is for the states to regulate, not Congress.”

Congress can wait to see if the government appeals this case to the U.S. Court of Appeals for the 6th Circuit and ultimately to the Supreme Court, if Friedman’s ruling is upheld.

Whether or not the ruling stands, however, Congress can amend the statute to provide the jurisdictional link to interstate commerce that the district court found lacking.

Following the Supreme Court’s decision in Lopez, for instance, Congress amended that statute to require the government to prove that a gun was shipped across state lines or otherwise moved in, and affected, interstate commerce.

As the Supreme Court later said in Morrison, “Such a jurisdictional element may establish that the enactment is in pursuance of Congress’ regulation of interstate commerce.”

In the meantime, as the government points out, 27 states already have bans on female genital mutilation on the books. The other states can, and should, adopt similar prohibitions if these procedures are not clearly prohibited by any other existing law.

For those remaining states, the court suggested that these procedures could be prosecuted under existing laws dealing with battery, child abuse, or other laws concerning sexual misconduct.

As the government explained at a December 2017 hearing, female genital mutilation qualifies as “criminal sexual conduct” because it involves unlawful touching and penetration. “If that is correct,” the court concluded, “then FGM could already be prosecuted in every state under existing criminal sexual conduct statutes.”

Thus, the court continued, no one can seek female genital mutilation by traveling “to refuge states where the practice is not prohibited” because “[n]o state offers refuge to those who harm children.”

For that, we can be thankful, and perhaps hopeful that federalism and child protection are not mutually exclusive ends.