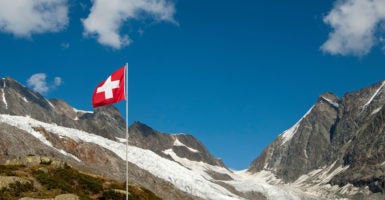 It makes sense to prioritize a trade deal with Switzerland. Pictured is the Swiss flag near the mountain pass Loetschenluecke and the glacier Langgletscher, Loetschental, Valais, Switzerland. (Photo: GFC Collection/agefotostock/Newscom)

U.S. Trade Representative Robert Lighthizer recently informed Congress that the United States would like to pursue trade talks with the European Union, the United Kingdom, Japan and the Philippines.

Another country that merits such consideration for a bilateral trade pact is Switzerland. There are five reasons for that.

Going beyond those five reasons, the shared values of the United States and Switzerland make the two countries natural, forward-looking economic partners.

As Ed Feulner, founder and former president of The Heritage Foundation, pointed out, “It’s time for the U.S. trade representative and the White House National Economic Council to fast-track dialogues with their Swiss counterparts in the pursuit of a U.S.-Swiss economic freedom partnership.”

Rather than requiring hundreds of pages to institutionalize a trade and investment pact with Switzerland, the pact should be straightforward, simple, and streamlined.

It makes sense to prioritize a trade deal with Switzerland. The pursuit of a perfect agreement, nonetheless, should not be allowed to be the enemy of a good agreement.

The two countries should be willing to consider a mutually acceptable agreement that would produce real practical gains, even if it does not achieve everything that could be asked of it.

The unique opportunity to notch up the U.S -Swiss partnership in a practical way with a high-quality trade agreement should not be missed.