The Green Agenda Burns to Ashes in Paris 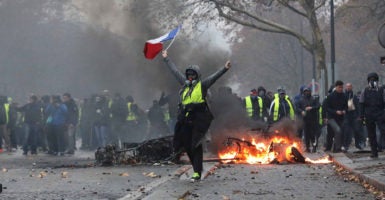 Protests have been staged across Paris, in part due to proposed carbon taxes. (Photo: Tatif/Wostok Press/ZUMA Press/Newscom)

A riot is an ugly thing.

The anarchical mayhem in the streets of Paris in recent days paint a picture of a fractured society with deep-seated problems—a breakdown of the fragile yet essential rule of law.

While we’ve come to expect such things in France, there are specific reasons why these protests have erupted in the last month.

The “climate” agenda, peddled as a means to save the planet and reduce inequality, is being exposed in France as an agenda inherently at odds with the interests of middle- and working-class people.

Last year, a wide range of American and international media, celebrities, and activists excoriated President Donald Trump for pulling the United States out of the international Paris climate agreement. Trump said in 2017 that he would put “no other consideration before the well-being of American citizens” and that he would reject an agreement that would force taxpayers to “absorb the cost in terms of lost jobs, lower wages, shuttered factories, and vastly diminished economic production.”

Former Vice President and climate change activist Al Gore said at the time that leaving the deal was a “reckless and indefensible action.”

But Americans may in fact have a better grasp of their interests than a tiny elite across the pond and in America’s powerful media institutions. For proof, look to the streets of Paris.

Paris is now burning, and French President Emmanuel Macron, who was once widely praised as a kind of “centrist” savior of the global community, is in hot political waters.

Macron’s approval ratings sit at 23 percent in a recent poll, according to Reuters, a new low for his presidency. The “yellow vest” protesters, as they’ve been called, have forced his administration to back off its proposed new gas and utility taxes.

The protesters appear to come from a vast swath of French society and don’t fit neatly on the ideological spectrum. They’ve rebelled against high taxes while also calling for increases in the minimum wage.

Alas, the consequences of living in a society where the government is involved in every aspect of a person’s life.

“France’s violent Yellow Vest protests are now about many domestic concerns, but it’s no accident that the trigger was a fuel-tax hike,” read an editorial for The Wall Street Journal. “Nothing reveals the disconnect between ordinary voters and an aloof political class more than carbon taxation.”

France’s widespread use of nuclear power has allowed it to move a bit further away from the carbon economy in terms of energy costs, but its transportation sector is still highly reliant on oil, The Wall Street Journal noted.

For the average person, the cost of the war on climate change can be severe.

In a country like France, which is already dealing with economic hardship, low growth, and high joblessness rates, you have a recipe for disaster.

Maybe there is something to be said about leaders asserting national self-interest after all.

The shocking images of riots are nevertheless emblematic of the collapse of the green agenda and the animosity it engenders from the people it harms: the forgotten men—squeezed by regulations and taxes—who don’t count themselves among the privileged few who receive generous green energy subsidies.

In France, many see this dysfunctional system as inevitable and unchangeable without extreme recourse.

Certainly, we should deplore the mobs and destruction of property. In America, we’d hope that our differences can be solved through elections, deliberation, and peaceful protest, if necessary.

This is certainly possible as long as we maintain our constitutional system and a cultural respect for the rule of law that the Founding Fathers and generations of Americans blessed us with.

While France’s economy is stagnant, the U.S. economy has been booming—in part due to the flourishing oil industry and the curtailment of regulations that were a hallmark of the Obama era.

Are the conditions in Europe really what we want to replicate in the U.S.?

California is going down this path, and perhaps the new Congress will as well. But the chaos in France should serve as a stern warning of what lies down the road.