Democrats Will Use US Climate Report Against Trump In Court 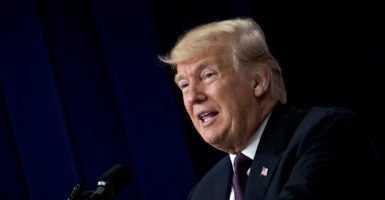 President Donald Trump can expect Democrats to use the latest National Climate Assessment in lawsuits against his administration’s “energy dominance” agenda.

“We’ll use every piece of that report that we can,” California Attorney General Xavier Becerra told The Washington Post in an interview Tuesday, referring to lawsuits against the Trump administration.

Becerra, a Democrat, has filed nearly two dozen lawsuits to stop the Trump administration from rolling back Obama-era energy and environment policies, including suing to stop the building of a U.S.-Mexico border wall on environmental grounds.

Becerra and others see the NCA, released on Nov. 23, as another tool to use in court. The NCA made dire predictions about future global warming, including rising seas, higher temperatures, and slower economic growth—though the most headline-grabbing claims relied on extreme climate projections that experts questioned.

“It is not a matter of resisting,” Becerra told the Post. “It is a matter of doing what we are doing. And as long as we are doing it according to the law, don’t get in our way.”

It’s not just Democratic attorneys general who will likely use the NCA in court. Environmental groups suing the Trump administration will likely cite the report, and trial lawyers teaming up with cities to sue energy companies may also cite its findings.

“This report will be used in court in significant ways,” Richard Revesz, an environmental law expert at New York University, told The New York Times on Sunday.

“This report will weaken the Trump administration’s legal case for undoing climate change regulations, and it strengthens the hands of those who go to court to fight them,” longtime climate activist and Princeton University geoscientist Michael Oppenheimer told the Times on the NCA’s release.

On the other hand, the study may also be used by environmental lawyers bringing suit on behalf of 21 youths against the Trump administration over global warming. The 3-year-old litigation, now sitting in the 9th U.S. Circuit Court of Appeals, asserts Americans have a right to a “stable climate.”

“I can imagine a lawyer for the Trump administration being asked by a federal judge, ‘How can the federal government acknowledge the seriousness of the problem, and then set aside the rules that protect the American people from the problem?’” Revesz told The Times.

“And they might squirm around coming up with an answer,” Revesz said.

Cities litigating climate claims may also seize on the report’s dire predictions to extract billions of dollars from energy companies because the latest NCA has a regional focus.

A handful of local governments teamed up with trial lawyers to sue energy companies, including major oil companies Exxon Mobil Corp. and BP, for damages from sea level rise and extreme weather allegedly made worse by global warming.

Judges have so far tossed out claims brought by several localities, including Oakland, California; San Francisco; and New York City. Those judges ruled global warming was an issue for Congress, not the courts, to solve.