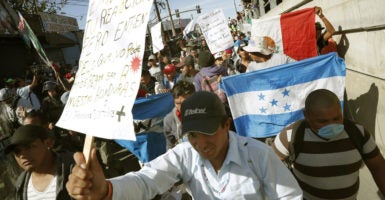 The mainstream media and Democrats have criticized the Trump administration’s response to the migrant caravans storming the nation’s southern border.

However, many of the critiques either don’t provide full context or are factually incorrect, based on information released Tuesday by the Department of Homeland Security.

Here are three narratives that the Department of Homeland Security is pushing back against:

The long-running narrative has been that Border Patrol officials are separating children from parents. However, that doesn’t take into account fraudulent families, DHS spokeswoman Katie Waldman noted in a statement.

From April 19 to Sept. 30, the government separated a total of 507 illegal immigrants within “family units” that weren’t legitimate, meaning the adults were not parents or guardians of the children, Waldman said.

The Rio Grande Valley in Texas had the highest number of reported fraudulent cases.

“In response to the misreporting from multiple outlets, I wanted to highlight the rampant fraud taking place at our Southern border,” Waldman said in the statement. “Aliens know that if they bring any minor with them, they will be apprehended by Border Patrol and released into the interior of the United States.”

She clarified, however, that the department isn’t claiming all cases are fraudulent.

“This data does not show, nor does DHS assert, that all minors apprehended as part of a family unit are illegitimate, but it does indicate that there is a significant problem that provides DHS the needed authority to protect the best interests and welfare of all children,” Waldman said.

The separation policy was based on a culmination of court decisions and legislation since the 1990s.

In 1997, the Clinton administration entered into something called the Flores Settlement Agreement, which ended a class-action lawsuit first brought in the 1980s.

In a separate development, in 2008, a Democrat-controlled Congress approved bipartisan legislation to combat human trafficking, and President George W. Bush, a Republican, signed it into law.

Section 235(g) of that law, the William Wilberforce Trafficking Victims Protection Reauthorization Act, states that unaccompanied minors entering the United States must be transferred to the custody of the Department of Health and Human Services’ Office of Refugee Resettlement, rather than to the Department of Homeland Security.

The caravan still moving toward the U.S.-Mexico border includes 8,500 migrants, according to the Department of Homeland Security.

Media outlets and Democratic politicians seized on children being among the migrants bearing the brunt of tear gas deployed Sunday along the California border, when hundreds of the migrants rushed the border.

A migrant family, part of a caravan of thousands traveling from Central America en route to the United States, runs away from tear gas in front of the U.S.-Mexico border wall in Tijuana, Mexico.

It’s wrong to gas women and children and the elderly. That shouldn’t be a partisan view, nor should that be uncomfortable to “the men and women in duty” https://t.co/PBHRE5utCT

However, the Obama administration used tear gas at the border on a monthly basis, The Washington Times reported.

Also, the Obama administration used pepper spray when a far smaller contingent of only 100 immigrants charged the border in 2013, The San Diego Union-Tribune reported.

Homeland Security Secretary Kirstjen Nielsen said in a statement Monday that the current violent rush on the border eclipsed prior problems.

Secretary Kirstjen Nielsen provided the following statement regarding the recent crisis on our southern border. “Given…

Posted by Department of Homeland Security on Monday, November 26, 2018

“First, the violence we saw at the border was entirely predictable. This caravan, unlike previous caravans, had already entered #Mexico violently and attacked border police in two other countries,” the secretary said in a Facebook post.

“I refuse to believe that anyone honestly maintains that attacking law enforcement with rocks and projectiles is acceptable. It is shocking that I have to explain this, but officers can be seriously or fatally injured in such attacks. Self-defense isn’t debatable for most law-abiding Americans.”

She added: “[T]he caravan is far larger and more organized than previous ones. There are 8,500 caravan members in Tijuana and Mexicali. There are reports of additional caravans on their way.”

Critics of the Trump administration contend the migrants have a legal right to seek asylum in the United States.

Let me repeat myself in case you didn’t hear or read the US legal code. @realDonaldTrump: Seeking asylum is LEGAL.

Migrants at our border are looking for help. Yet, instead of greeting them w understanding, you deploy tear gas. Shameful & disgusting. https://t.co/RzEFJDqqzh

However, Nielsen pushed back, noting that many of the migrants in the caravan do not legally qualify for asylum. Meanwhile, most are not women and children.

Historically, less than 10% of those who claim asylum from #Guatemala, #Honduras, and #ElSalvador are found eligible by a federal judge. 90% are not eligible. Most of these migrants are seeking jobs or to join family who are already in the U.S. They have all refused multiple opportunities to seek protection in Mexico or with the UNHCR, the UN Refugee Agency.

She also said “the caravan members are predominantly male.”

“It appears in some cases that the limited number of women and children in the caravan are being used by the organizers as ‘human shields’ when they confront law enforcement,” Nielsen wrote.

“They are being put at risk by the caravan organizers, as we saw at the Mexico-Guatemala border. This is putting vulnerable people in harm’s way,” Nielsen said.

This story was corrected to note that the Obama administration used pepper spray at the border in a 2013 incident.