Pence’s Trip to the Indo-Pacific Was a Win for Diplomacy, but Not Trade 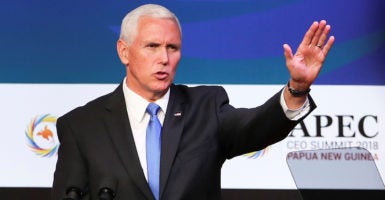 Vice President Mike Pence this month completed his third trip to the Indo-Pacific. Following on his historic speech on China policy in Washington in early October, hopefully the feedback from his visit to Japan, Singapore, Australia, and Papua New Guinea will prompt adjustments in the approach to that policy.

On the diplomatic and security side of things, the trip was very positive.

Anytime the president or vice president of the United States—whatever the administration—visits a region where so many vital American interests are at stake, it is a good thing. It is an opportunity for them to demonstrate America’s continuing commitment to the region, in a way that only the elected leaders of its executive branch can.

However, it wasn’t the vice president, but rather the president, who was invited to attend the meetings of the Association of Southeast Asian Nations (ASEAN) in Singapore and the Asia-Pacific Economic Cooperation (APEC) in Papua New Guinea.

It was unfortunate that President Donald Trump was unable to go. These gatherings are annual occurrences with very predictable schedules, and they are intended for heads of government or state. Rightly or wrongly, attendance is seen as a sign of interest.

But what’s done is done. Trump is not the first president to miss. President Barack Obama passed in 2013 for the dubious, political reason that a government shutdown prevented him from attending. In his place, he sent Secretary of State John Kerry.

The year before, in 2012, when he skipped, more understandably in favor of the Democratic National Convention, he sent Secretary of State Hillary Clinton.

So at least Trump sent his second-in-command. The important thing at this point is that the president not make a habit of skipping the meetings, and commit as early as possible to attend them next year.

Protocol aside, the administration is showing remarkable spine on China policy, and Pence brought that with him to Asia.

He continued to lay out the administration’s vision for a “free and open Indo-Pacific”—a strategic counter to growing Chinese influence throughout the region.

In the process, Pence made very plain where the U.S. stands on everything from the South China Sea and North Korea to ASEAN centrality and America’s unique commitment to Taiwan. He also made important interventions on behalf of the plight of the Rohingya and press freedom in Burma.

The reason for this trip was the meetings in Singapore and Papua New Guinea. Pence did not have to stop in Japan, but he did anyway. Calling the U.S.-Japan alliance “the cornerstone of peace and prosperity in the Indo-Pacific,” he and Japanese Prime Minister Shinzo Abe sought to align messages ahead of the ASEAN and APEC meetings. The symbolism of this coordination was lost on no one, not least the Chinese.

So, the vice president’s trip was good on diplomatic and security issues. On the economic side, it demonstrated the need for improvement. As is, the administration’s aggressive messaging on China will not find much uptake in the region.

Yes, America’s partners in the Indo-Pacific have issues in their economic relations with China. And yes, some of them might benefit in the narrow sense from current U.S.-China trade tensions. The press is full of stories about relocation of supply chains and investment out of China.

But in the macro sense, the tension worries the region, because it creates uncertainty. After all, trade patterns do not shift overnight. In fact, to the extent American tariffs have changed them, it has been to intensify trends already underway for market-based reasons.

Besides, ASEAN and APEC leaders want Chinese investment, and for good reason. Most of them have enormous infrastructure needs. The question is under what circumstances they should take the financing.

For that reason, the vice president’s announcement of an Indo-Pacific Transparency Initiative—a systematic effort to address issues of corruption—was a step in the right direction.

It is not just that the Chinese investments come with “strings attached” or are often “opaque,” “low-quality,” or “unsustainable,” as the vice president charged at APEC. The bigger problem is that the governments of the recipient countries know the terms—and agree to them anyway.

Presenting alternatives—such as the U.S. model of private sector-led investment and assistance from others in the region, like Japan—is important. The vice president addressed this very clearly.

However, if in full knowledge of the terms, countries in the region take the Chinese investment, it is their choice. It is not in the interest of the United States to compete with Chinese investments abroad simply because they are Chinese.

The most serious problem with the administration’s trade message is that governments in the region will not sign up to anything resembling containment of China. And that’s what the sweeping attack on U.S.-China trade (what some of its proponents are calling an effort to decouple the American and Chinese economies) looks like to them.

What will be welcomed in the region, just as it is on Wall Street, are prospects for a deal between the U.S. and China that puts trade tensions on hold.

In each place Pence visited, he held out that possibility—even as the headlines blared out continued confrontation. A deal will remove the containment threat and thereby enable greater support for discrete American objections to Chinese behavior on economics, as well as in other areas, including Taiwan and the South China Sea.

Two years in, the administration’s China policy is crystalizing, and it was very much front and center on Pence’s trip.

The vice president demonstrated sound objectives on the diplomatic and security side. On economics, he conveyed the policy’s limitations. The reaction to his messages should encourage the administration to make adjustments.