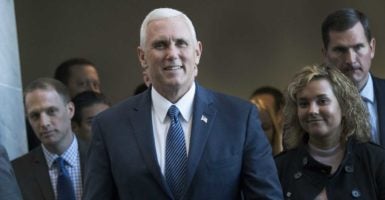 Vice President-elect Mike Pence, the governor of Indiana, asked nearly two dozen fellow GOP governors gathered in Orlando to directly reach out to him on policy matters in the course of the coming Donald Trump administration.

Before serving a term as the Indiana governor, Pence served a decade in the U.S. House of Representatives, prompting his former colleagues to hope he’ll play a paramount role in Trump’s administration.

On Thursday, Pence was back on Capitol Hill where he met with the House Republican Conference as well as Senate Democratic Charles Schumer of New York and House Minority Leader Nancy Pelosi of California.

“The biggest role Mike Pence could play is going to be good for America,” @SteveKingIA says.

Speaking to the Republican conference Thursday, Pence said the Trump administration would pursue tax reform, repealing Obamacare and strengthening border security, according to a news release from the presidential transition team.

“The biggest role Mike Pence could play is going to be good for America,” Rep. Steve King, R-Iowa, who sat next to Pence on the House Judiciary Committee, told The Daily Signal.

Pence’s experience on Capitol Hill and working with governors across the country would have dual value for the political outsider Trump, who has already indicated Pence could be a prominent vice president after putting him in charge of the presidential transition team last week.

Pence was also involved with Trump in speaking to 29 other world leaders, according to the transition team’s news release Wednesday.

Beyond Pence’s political connections, he has served as a bridge to conservative voters. Some conservatives didn’t trust Trump in the Republican presidential primary, and backed his leading opponent Sen. Ted Cruz of Texas—whom Pence endorsed ahead of the Indiana primary.

“Mike [Pence] is a constitutionalist. He’s a fiscal conservative. He’s for a balanced budget,” King told The Daily Signal in an interview on Capitol Hill. “He’s a social conservative. He’s pro-life. He defends natural marriage. You add that all up. His foreign policy credentials are good. He sat on the Foreign Affairs Committee for about eight years.”

Trump should be aware that Pence is likely responsible for a good share of votes from wary conservatives, said author and presidential historian Craig Shirley.

“Pence reassured a lot of conservatives about Trump,” Shirley said.

Pence was likely the wisest choice Trump could have made for a vice president, said Lee Edwards, distinguished fellow in conservative thought at The Heritage Foundation.

“He has checked all the boxes for conservatives,” Edwards told The Daily Signal. “He’s been in talk radio, was a House conservative and a governor. He will be important for implementing Trump’s agenda with Congress. He knows these guys, certainly in the House, and will be a point man.”

Rep. Jim Jordan, R-Ohio, the chairman of the conservative House Freedom Caucus, asserted during The Heritage Foundation’s Conversation With Conservatives event Wednesday that the House would continue to serve as a check on executive power during the Trump administration.

Jordan had kind words about the incoming vice president, though he declined to speculate how powerful Pence might be in a Trump administration.

“That’s between him and Donald Trump,” Jordan told The Daily Signal in an interview on Capitol Hill. “Mike [Pence] is a wonderful guy. He was a friend when he worked here. He was a mentor when he was here, a very talented guy.”

For example, Vice President Thomas Marshall was in office for more than a year before getting an appointment to meet with President Woodrow Wilson, Shirley said. President Dwight Eisenhower didn’t give a lot of responsibility to Vice President Richard Nixon, and President John F. Kennedy did not include Vice President Lyndon B. Johnson in many of his administration’s decisions.

“I would expect Mike Pence will have a big role as evidenced by the fact that he has taken over the transition team, that is the biggest job facing a Trump administration now,” Shirley told The Daily Signal in a phone interview. “Trump, because he’s a newcomer, will need Pence, someone experienced in government.”