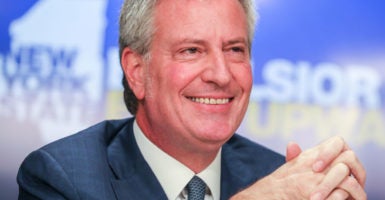 As New York City Mayor Bill de Blasio rolls out the red carpet for half of Amazon’s new “HQ2” in Long Island City, he’s doubling down on his efforts to block another big company from getting a bite of the Big Apple: Walmart.

“Walmart does not belong in New York City,” de Blasio declared on a Friday radio segment while defending the city’s generous tax breaks for HQ2.

“I was actively involved in the effort to keep Walmart out of New York City, [and] I would, this very day, re-engage that effort if Walmart made any effort to come back in. We have all worked together to keep them out, and we have succeeded in keeping them out,” he said.

For Amazon, de Blasio is doing the exact opposite. Rather than blocking the tech giant from the streets of New York, he’s incentivizing it to come in.

In justifying that decision, de Blasio explained that with Walmart, “we were dealing with there was the actual stores.” But “Amazon,” he said, “is part of the American economy.” (As if Walmart is not? Surely, that’s news to the 1.5 million Americans that Walmart employs.) De Blasio continued:

Whatever you like or dislike about Amazon, Walmart is an entirely different universe in terms of the systematic efforts that they have undertaken to not only undermine labor, small business, the environment, American workers, and obviously, the politics of [Walmart’s owners] the Walton family to add to it.

The Walton family was traditionally known for donating to Republican candidates. But more recently, members of the family have backed the Clintons.

Perhaps it should come as no surprise that de Blasio thinks a person’s political views are fair grounds for keeping their business from New York City. He did, after all, encourage a boycott against Chick-fil-A because of the owner’s religious beliefs. But this is nonsense. City officials have no business banning companies from entering their city based on religion or politics.

Moreover, de Blasio appears confused about what Amazon and Walmart do—in many ways, the two companies are quite alike. Both make purchasing goods easier and more accessible by lowering costs for consumers, and in the process, create millions of jobs for working Americans.

Sadly, much of their success comes at the expense of small businesses, which is an unfortunate consequence of the free market. The good news is, our economy has proven it can adapt.

Where Amazon and Walmart differ is in their business models. The former, almost entirely online, relies on shipping goods, while the latter mostly relies on old-fashioned brick-and-mortar storefronts.

In keeping Walmart out of New York City, but incentivizing Amazon to come in, de Blasio is engaging in crony capitalism. Worse, he is putting ideological politics over adding thousands of jobs that would directly benefit New York’s economy. Jobs he apparently thinks New Yorkers are too good for.

And as an aside, does de Blasio really think all those Amazon cardboard shipping boxes are good for the environment?

If New York’s mayor is concerned about protecting small businesses, he should have thought twice before rubber-stamping Amazon’s new HQ2 through billion-dollar tax credits and other incentives that local mom-and-pop shops don’t get.

De Blasio also should have thought twice before demonizing President Donald Trump’s tax-cut plan, which attempted to extend similar benefits he gave Amazon to all businesses across America. (Perhaps, without the helipad.)

A bite of the Big Apple should be for anyone’s taking. Instead of picking winners and losers, de Blasio should get out of the way.