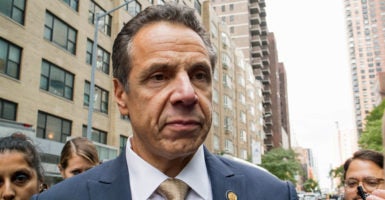 The documents also show how tempting and easy it could be for state bureaucrats to launch similar operations, so long as their legislatures empower them with broad regulatory authority.

Now, just such a scheme is coming to light in New York, where the National Rifle Association has sued Democratic Gov. Andrew Cuomo and the state Department of Financial Services for allegedly threatening banks and insurers into severing business ties with the association.

During Operation Choke Point, Obama administration officials targeted disfavored businesses, including firearms dealers and short-term money lenders, by disparaging them and intimidating banks with whom they did business.

In a memo, the Federal Deposit Insurance Corp., an independent agency tasked with maintaining “public confidence in the nation’s financial system,” listed those lawful businesses as “‘elevated-risk’ merchants.” And in 2013, Justice Department officials mailed that list to financial institutions, along with administrative subpoenas, to “warn” them of those “high-risk merchants/activities.”

In 2014, an industry coalition of payday lenders sued the Federal Deposit Insurance Corp., claiming that it violated their due process rights through intimidating their business partners, even threatening “some banking officials with criminal prosecution if they persisted in banking payday lenders. And when the banks inevitably yielded to this unbearable pressure,” the lenders argued, “the [Federal Deposit Insurance Corp.] then immediately demanded that the decision be portrayed as a voluntary action to whitewash the agency’s backroom pressure tactics.”

In August 2017, Stephen E. Boyd, assistant attorney general for the Justice Department’s Office of Legislative Affairs, told House Judiciary Chairman Bob Goodlatte, R-Va., “[that] initiative is no longer in effect, and it will not be undertaken again.”

But documents released last month in the payday lenders’ ongoing lawsuit are cause for continued concern because they show how personal Operation Choke Point was for the government officials who were involved.

One email from a Federal Deposit Insurance Corp. regional director read, “I literally cannot stand pay day lending.” Another letter read, “Any banks even remotely involved in payday [lending] should be promptly brought to my attention.”

Another regional director wrote, “[W]e have generally found that activities related to payday lending are unacceptable for an insured depository institution.”

According to the Community Financial Services Association of America, “Despite contentions that Operation Choke Point is no longer running, the culture it created persists, and some businesses previously targeted are still seeing their banking relationships terminated without cause.”

>>> Those Who Carried Out Operation Choke Point Should Face Penalties

In the National Rifle Association’s ongoing lawsuit against Cuomo, it seems that the culture not only persists, but has spread to at least one state financial regulator.

The NRA claims that Cuomo and the Department of Financial Services were not merely seeking to enforce state law, but were coercing banks and insurers into ending their business relationships to chill the NRA’s pro-Second Amendment speech.

Is this Operation Choke Point 2.0?

Last week, the U.S. District Court for the Northern District of New York allowed the NRA’s lawsuit to proceed, finding that “allegations of direct and implied threats to insurers and financial institutions because of these entities’ links with the NRA, and the allegations of resulting harm to the NRA’s operations, are sufficient to make out plausible First Amendment freedom-of-speech claims.”

Among the “direct and implied threats” is one contained in a press release Cuomo issued in April stating, “I am directing the Department of Financial Services to urge insurers and bankers statewide to determine whether any relationship they may have with the NRA or similar organizations sends the wrong message.”

The point, he continued, was that “working together, we can put an end to gun violence in New York once and for all.”

In it, she wrote, “the department encourages its insurers to continue evaluating and managing their risks, including reputational risks, that may arise from their dealings with the NRA or similar gun promotion organizations.”

Cuomo then tweeted, “The NRA is an extremist organization. I urge companies in New York State to revisit any ties they have to the NRA and consider their reputations, and responsibility to the public.”

After firing those warning shots, the Department of Financial Services fined Chubb Ltd. and Lockton Affinity LLC for violating state insurance laws and also prohibited them from “enter[ing] into any agreement or program with the NRA to underwrite or participate in any affinity-type insurance program involving any line of insurance.”

What was true for Operation Choke Point appears true of Cuomo & Co.’s targeting of the NRA’s business partners.

The Operation Choke Point and NRA cases are symptoms of the same disease, which James Madison warned about in Federalist No. 47: “The accumulation of all powers, legislative, executive, and judiciary, in the same hands, whether of one, a few, or many … may justly be pronounced the very definition of tyranny.”

So long as Congress and state legislatures delegate broad regulatory power to agency officials—who are too often empowered to write, interpret, and enforce the law—we should not be surprised to discover more “Choke Points.”

These cases are providing more strong evidence that state and federal lawmakers should reconsider major regulatory reform before the disease spreads further.