Operation Choke Point Is Over. But Without Major Reforms, It Could Happen Again. 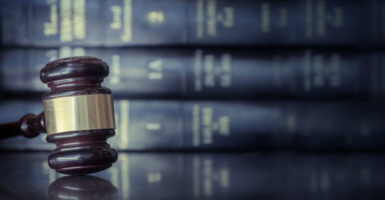 Kudos to the Justice Department for ending Operation Choke Point.

Operation Choke Point was an effort by Obama administration officials to destroy lawful businesses that they personally disliked by intimidating finance companies into denying them service.

Last week, Stephen E. Boyd, assistant attorney general for the Justice Department’s Office of Legislative Affairs, wrote a letter to House Judiciary Chairman Bob Goodlatte, R-Va., saying that Operation Choke Point was “misguided” and that “law abiding businesses should not be targeted simply for operating in an industry that a particular administration might disfavor.”

Although Operation Choke Point is now over, the federal government’s power to target individuals, groups, and corporations remains as vast and murky as ever. That is due to an excess of federal criminal law and regulations that most people have never heard of.

Those rules increase what the 57th attorney general, Robert H. Jackson, called “the most dangerous power of the prosecutor: that he will pick people that he thinks he should get” and then pick their crime.

Identifying, reviewing, and paring down America’s criminal laws and regulations should be at the top of the agenda for Congress and any administration that is committed to reigning in excesses in government power.

Operation Choke Point shows why that objective is so important. Heritage Foundation senior legal research fellow Paul Larkin identified how it happened in his paper, “The Reach of the Congressional Review Act.”

After President Barack Obama lost Democratic majorities in both the House and Senate, “he and the agencies he oversaw as president increasingly resorted to the issuance of executive orders and agency interpretive rules or guidance documents to effect changes in the law.”

In 2012, Obama administration officials decided to target specific categories of businesses that they disliked, including firearms dealers and short-term money lenders, by intimidating banks that do business with them.

The Federal Deposit Insurance Corp., an independent agency with a broad mission to maintain “public confidence in the nation’s financial system,” published a memorandum with a footnote that listed those businesses among “certain ‘elevated-risk’ merchants.”

Earlier this month, Goodlatte and other congressmen wrote a letter on the operation to Attorney General Jeff Sessions and other officials. It explained that in 2013, the Justice Department sent “administrative subpoenas to banks doing business with certain types of entities” along with the Federal Deposit Insurance Corp.’s list of “high risk merchants/activities.”

The anticipated effect, the congressmen wrote, was that “banks would stop serving lawful businesses in the targeted categories.”

Regulators have no legal authority to direct private financial services away from government-disfavored but fully legal activity—such actions promote unfair legally disparate treatment of commercial actors. Moreover, financial intermediaries and the firms they are pressured into “choking off” suffer welfare losses from such conduct, as do the consumers who are denied access to (or pay higher prices for) desired goods and services supplied by the “choked off” merchants.

In 2017, the House Judiciary Committee convened a panel of “business owners from across the country” who “all had similar stories of longstanding banking relationships suddenly terminated without any evidence of heightened risk or wrongdoing.”

The assistant attorney general, in his latest letter to Goodlatte, explained that the Federal Deposit Insurance Corp. has since rescinded its list. He said “the initiative is no longer in effect, and it will not be undertaken again.”

But that does not resolve the underlying concern that federal officials can target private actors with unpredictable enforcement of agency rules whose requirements are lost on the average person.

As early as 1940, Jackson, then-attorney general, warned all U.S. attorneys that “[w]ith the law books filled with a great assortment of crimes, a prosecutor stands a fair chance of finding at least a technical violation of some act on the part of almost anyone.”

Since then, the law books have steadily swollen.

As Judge Alex Kozinski of the U.S. Court of Appeals for the 9th Circuit has written, there are now “thousands of laws and regulations that make people criminals for unwittingly breaking complex [rules].”

While it is estimated that there are more than 4,450 federal criminal laws and over 300,000 federal criminal regulatory offenses, no one knows for certain how many exist today, or all of the conduct that they proscribe.

Supreme Court Justice Neil Gorsuch once asked in a 2013 lecture, “What happens to individual freedom and equality when the criminal law comes to cover so many facets of daily life that prosecutors can almost choose their targets with impunity?”

It leaves us in roughly the same peril that businesses targeted by Operation Choke Point faced: subject to arbitrary punishment for conduct that a reasonable person would not assume to be immoral or illegal, much less a crime.

The Justice Department deserves credit for ending its “misguided” Operation Choke Point. Yet, if the goal is to restore common sense and certainty to federal law, there is plenty more that can and should be done before someone else takes advantage of the current excesses of federal power—the federal criminal code being the most egregious.

To start, Congress could direct regulatory agencies to identify and publish an accessible list of their regulations that potentially carry criminal penalties. The public would then have meaningful notice of their legal duties.

Also, Congress would then be able to review and ratify or repeal any of those regulations so that they, our elected officials, retain accountability for rules that entail imprisonment and deprivation of constitutional liberties, including the right to vote and to carry a firearm.