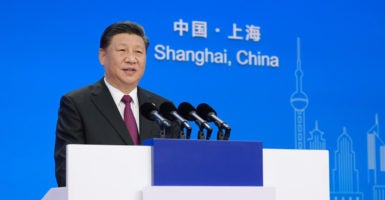 Helen Lamm is a member of the Young Leaders Program at The Heritage Foundation.

He and President Donald Trump will meet to discuss outstanding trade issues at the G20 summit in Argentina later this month.

The expo, a brainchild of Xi himself, was designed to bring together 3,000 companies from 100 different countries to discuss and foster “economic globalization” among them. This was the first meeting of what’s proposed to become an annual conference.

According to its official purpose, the expo will “[facilitate] countries and regions all over the world to strengthen economic cooperation and trade, and to promote global trade and world economic growth in order to make the world economy more open.”

Xi began his speech by reiterating China’s support for multilateral trade and globalization. He emphasized China’s role in preserving the global trading order and went on to note the threat that protectionism poses to globalization. He described globalization as a historic and irreversible trend that each country should enthusiastically accept.

Thematically, his keynote statement emphasized globalism and protectionism as the central, mutually exclusive dichotomy of our times. The president brought up two leading trends to the world order: “global governance” (citing “multilateralism,” “openness,” and “the system of free trade” as its tenets) and “unilateralism.” He upheld global governance as ideal and characterized it as under attack by unilateralism.

Throughout the speech, Xi repeatedly emphasized China’s openness, stating that “openness, innovation, and inclusiveness have become the hallmark of Shanghai. They are also a vivid reflection of China in the new era and its commitment to development and progress.”

Finally, in reference to increasing protectionism around the world, Xi said, “In a world of deepening economic globalization, practices of the law of the jungle and winner-take-all only represent a dead end.”

A number of observers see the Chinese president’s criticism of the isolationist, “beggar thy neighbor” approach as an implicit characterization of “America first” policies and a thinly veiled jab at Trump. Xi’s insistent characterization of China as the virtuous victim opposing American protectionism does not necessarily comport with reality. Xi has made a habit of toting the values of “free trade” as a means of catering supporters of market reform in China.

The Chinese government has made some effort to liberalize its markets in recent years through various pronouncements and initiatives. China reduced its tariffs on over 1,500 consumer products earlier this year and reduced tariffs on auto imports by 10 percent. In addition, its ranking in The Heritage Foundation’s Index of Economic Freedom has moderately improved over time.

Recent developments in intellectual property law, brought on by a mix of market incentives and political pressure, likely contributed to the improvement in China’s latest scores for government integrity and judicial effectiveness. Still, more than 46 percent of the value of all counterfeit items seized by U.S. Customs originate from China.

The Chinese government has established free trade pilot zones in various major cities along the coast, which are “intended as testing grounds for local authorities to support businesses and attract foreign investment with fewer restrictions.” But competition in these areas will only be allowed so long as they don’t compete with the interest of China’s state-owned enterprises.

In his closing remarks, Xi once again made a series of promises to stimulate the Chinese economy, which would include increasing imports, promoting the liberalization of investments, building a better business environment (especially improved intellectual property law), and promoting international cooperation. Yet even these proposals echoed the policy initiatives presented by Chinese Vice Premier Liu He at the Davos World Economic Forum earlier this year.

Given the expo’s high profile, it’s unsurprising that Xi avoided controversy in anticipation of his meeting with Trump at the G20 summit at the end of November.

Yet the fact remains that many of Xi’s prior promises to expand market reform have proved empty. As such, both the U.S. business community and political leaders will likely be reticent to take China’s latest promises at face value.