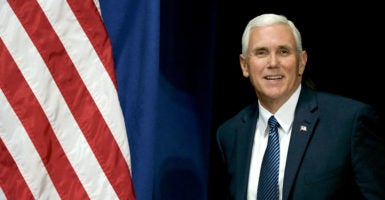 Vice President Mike Pence will be getting some familial reinforcement in Congress in January, when his older brother takes the House seat he won on Tuesday night. It's the same seat the now-vice president won 18 years ago and held for six terms. Photo: Bastiaan Slabbers/ZUMA Press/Newscom)

The Pence family will soon have a second member serving in elective office in Washington.

Pence, who will turn 62 on Nov. 14, will take the seat currently held by outgoing Rep. Luke Messer, a fellow Republican. Messer had held the seat for the past six years. He gave it up in an unsuccessful bid for the Republican nomination for Senate earlier this year.

#TeamPence has put 40,000 miles on our campaign van, made 350,000 calls & attended 300 events in the 6th District. We’ve worked hard for every vote. Thanks to @WTHRcom for stopping by in Columbus to talk about our final push on Election Day. I’m Ready to Serve, Again! pic.twitter.com/RxxPNKd9eK

Pence, a resident of the 6th District for nearly 60 years, did not participate in any debates with Lake, and largely shunned media interviews, the Indianapolis Star reported.

He’s a strong supporter of his brother’s and President Donald Trump’s agenda, and the Trump family reciprocated the candidate’s support: Donald Trump Jr. and Eric Trump, the president’s sons, campaigned with Pence in recent weeks.

The vice president congratulated his brother on Twitter not long after the announcement of his victory.

Congrats to my brother @GregPenceIN on being elected to serve in the US Congress. Greg served our country admirably in uniform & will do the same in Washington DC. I am so proud & look forward to working w/ him to advance @RealDonaldTrump’s agenda for America & the Hoosier State!

In a Pence ad two weeks before Election Day, the candidate claimed he would “fight for … Hoosier values out in D.C.”

“I believe Donald Trump cares more about the middle class more than any president we’ve had in a long time, and he needs help out there,” he said. “But he needs more Marines to go out there and be in Congress and help his agenda get through Congress.”

Pence, who owns and operates two antique malls with his wife in the 6th District, referenced his earlier career as an infantry officer in the Marine Corps in the ad, saying, “I have the same calling that I did in 1979 when I joined the Marine Corps.”

Videos on Pence’s campaign website say he supports a border wall, the repeal and replacement of the Affordable Care Act (aka Obamacare), and infrastructure spending.

The political-analysis website FiveThirtyEight.com had put Pence’s chances of winning at 99.9 percent.