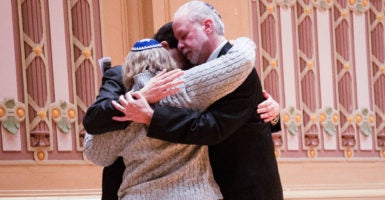 Pittsburgh Rabbi Jeffrey Myers said he’s chosen to believe “good will always win out” in spite of the tragedy that occurred during Saturday’s shooting at the Tree of Life synagogue.

Myers appeared on CNN’s “New Day” Tuesday to discuss the mass shooting that claimed the lives of 11 people and wounded several others. The suspect has been identified as Robert Bowers and reportedly screamed, “All Jews must die,” according to KDKA. He was also allegedly armed with two pistols and an AK-47.

“I don’t think there’s a magic solution to breaking hate—I think every human being has the capability of being evil and of being good. They make a personal choice which direction they want to go,” Myers said. “I’ve made the choice and some say rather naively, but I’ve made the choice that good will always win out and that this is not about any one person, this is about hate, and that good must win. The alternative, I don’t want to think about.”

Host Alisyn Camerota asked Myers about the backlash he’s received for saying President Donald Trump was welcome to visit his synagogue, and Myers said he had received so many hateful emails that he’s lost count.

“When I first said that the president was welcome, I received a lot of email[s], too numerous to count, I can’t keep track. For every email I read, two appear as I’m reading that one, so I just cannot keep up with it,” Myers replied.

Camerota asked what message Myers has for Trump if he sees him and Myers said, “The same message I just shared with you.”

Content created by The Daily Caller News Foundation is available without charge to any eligible news publisher that can provide a large audience. For licensing opportunities for this original content, email  [email protected]