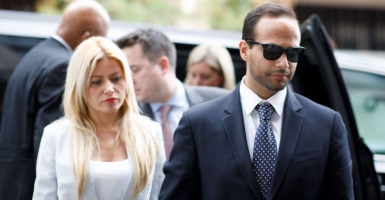 George Papadopoulos, a former Trump campaign adviser, arrives Sept. 8 with his wife Simona Mangiante for a court appearance in Washington. He is scheduled to testify Oct. 25 to members of two House committees. (Photo: Chine Nouvelle/SIPA/Newscom)

Former Trump campaign adviser George Papadopoulos, at the center of early allegations of “collusion” with Moscow, will appear before Congress to give closed-door testimony later this month, his wife confirmed to The Daily Caller News Foundation.

Papadopoulos, 31, will appear Oct. 25 before members of the House Judiciary Committee and the House Oversight and Government Reform Committee, Nina Mangiante confirmed. Papadopoulos also is in discussions to meet with the Senate Select Committee on Intelligence, which is investigating allegations of collusion between the Trump campaign and the Russian government, CNN reported.

Unlike most witnesses in congressional investigations into Russian meddling in the 2016 election, Papadopoulos has asked lawmakers to invite him to provide testimony. He has said he wants to discuss what he calls a series of suspicious contacts he had with foreign nationals while he worked on the Trump campaign.

Papadopoulos has suggested that Western spy agencies illegally targeted him. At least one Western intelligence asset approached the former Trump aide. An FBI informant named Stefan Halper contacted Papadopoulos in September 2016 with an offer to fly him to London to discuss writing a report on Mediterranean energy issues.

Papadopoulos accepted the offer and met with Halper in London. Unbeknownst to Papadopoulos, Halper already had struck up a relationship with Carter Page, another Trump campaign aide.

Papadopoulos has been identified as the catalyst for the FBI’s collusion probe, which formally began on July 31, 2016. Despite the early focus on the Trump aide, he appears not to be the key to evidence of collusion that the FBI initially suspected.

Papadopoulos was sentenced to 14 days in jail in the Russia investigation led by special counsel Robert Mueller. But the charges against him stemmed from making false statements to the FBI, rather than conspiracy with Russians during the campaign.

He pleaded guilty Oct. 5, 2017, to lying to the FBI about his contacts with Joseph Mifsud, a Maltese professor who told him during a meeting in London in April 2016 that the Russians possessed “thousands” of Hillary Clinton emails.

Two weeks after that meeting, Papadopoulos met in London with Alexander Downer, top Australian diplomat to the U.K.

The conversation later led the FBI to open its investigation of the Trump campaign. Downer told others in the Australian government that Papadopoulos mentioned that Russia had derogatory information on Clinton.

Papadopoulos has speculated that the activities of Mifsud, Downer, and Halper were all part of the same operation. He has claimed that two officials at the U.S. Embassy in London approached him under suspicious circumstances at around the same time as his meetings with Mifsud and Downer.