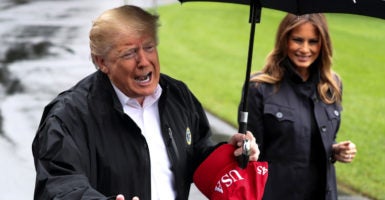 Much of President Donald Trump’s “60 Minutes” interview Sunday consisted of responding to veteran CBS News reporter Lesley Stahl’s questions on what have been Democrats’ talking points for months.

During one exchange, Trump described to Stahl how the media treated his predecessor, President Barack Obama, much differently.

“Man, he didn’t want to answer that,” Lesley Stahl says of President Trump’s response to her question about pledging not to fire Robert Mueller. “But you know something? He enjoyed the sparring.” For more from the president’s 60 Minutes interview, visit https://t.co/njJWGDYJSu pic.twitter.com/YMWKsY4Js4

Here’s a look at six of the biggest topics discussed and Trump’s responses.

Stahl pressed Trump on his administration’s suspended policy of separating children and parents who illegally cross the southern border.

“Well, that was the same as the Obama law. You know, Obama had the same thing,” Trump said.

Stahl shot back: “It was on the books, but he didn’t enforce it. You enforced it. You launched that, the zero tolerance policy, to deter families with children coming.”

Trump defended his position, saying: “When you allow the parents to stay together, OK, when you allow that, then what happens is people are going to pour into our country.”

Stahl asked: “So are you going to go back to that?”

After some back and forth, Trump said: “No, I want all the laws changed.”

2. A Lecture on Climate Change

Although it began as a question, Stahl seemed to be lecturing Trump on climate change by saying she wished he would travel to Greenland to see the melting ice.

“Do you still think that climate change is a hoax?” Stahl asked.

Trump answered in the negative, adding:

Stahl then talked about some presidential travel to prove her point.

“I wish you could go to Greenland, watch these huge chunks of ice just falling into the ocean, raising the sea levels,” Stahl said, without a question.

She went on to tell Trump that scientists with the federal government contend climate change is man-made.

“We have scientists that disagree with that,” Trump said, later adding: “I’m not denying climate change. But it could very well go back.”

Stahl: “But that’s denying it.”

The exchange then devolved into Trump and Stahl challenging each other to name a scientist who backs up their point.

“They say that we had hurricanes that were far worse than what we just had with Michael,” Trump said.

Stahl: “But what about the scientists who say it’s worse than ever?”

Trump challenged her to name some scientists.

“You’d have to show me the scientists,” he said, “because they have a very big political agenda, Lesley.”

Stahl conceded: “I can’t bring them in.”

Trump said Democrats acted “horribly” during the confirmation battle over new Supreme Court Justice Brett Kavanaugh, who was accused by a California woman at the 11th hour of sexually assaulting her when they were teens in the early 1980s.

President Trump on his treatment of Justice Kavanaugh accuser Dr. Christine Blasey Ford during a speech in Mississippi: “Had I not made that speech, we would not have won.” https://t.co/lAmK5rDsnn pic.twitter.com/A08Wjmlp74

Stahl, however, questioned whether Trump had created more divisions and asked him about a speech in Mississippi where he specified the gaps and contradictions in research psychologist Christine Blasey Ford’s testimony to the Senate Judiciary Committee about the incident she alleged occurred about 36 years ago.

“You go out and you go to Mississippi and you mimicked Professor Blasey Ford. You mimicked her,” Stahl said.

Trump said of his remarks: “Had I not made that speech, we would not have won [the confirmation fight]. I was just saying she didn’t seem to know anything, and you’re trying to destroy a life of a man who has been extraordinary.”

Stahl asked in a shocked tone: “Why did you have to make fun of her?”

Trump: “I didn’t really make fun of her.”

Stahl: “Well, they were laughing.”

The CBS reporter recalled Ford being asked by a senator about “the worst moment” during the alleged incident.

“And she said, ‘When the two boys laughed at me, at my expense,’” Stahl said, paraphrasing, then telling the president: “And then I watched you mimic her and thousands of people were laughing at her.”

Trump pushed back, saying: “The way now Justice Kavanaugh was treated has become a big factor in the midterms. Have you seen what’s gone on with the polls?”

He told Stahl that he believed he treated Ford with respect.

“But you seem to be saying that she lied,” Stahl said.

“You know what?” Trump shot back. “I’m not going to get into it, because we won. It doesn’t matter. We won.”

When Stahl asked whether Russian President Vladimir Putin was involved in assassinations, Trump replied: “Probably he is, yeah.”

During the segment aired on “60 Minutes,” Stahl noted that 32 people have been charged, convicted, or pleaded guilty in special counsel Robert Mueller’s probe of Russian election interference

The network showed images of Trump’s short-term campaign manager, Paul Manafort, who was convicted for unrelated financial crimes, and of Trump’s first national security adviser, Michael Flynn, who pleaded guilty to lying on a government disclosure form, also unrelated to the Russia probe.

However, Stahl didn’t mention that her 32 number includes two dozen Russians indicted for meddling in the presidential campaign, largely through social media.

Trump told Stahl: “They [Russians] meddled, but I think China meddled too.”

Stahl looked shocked, asking: “Why do you say China? The Russians meddled.”

Stahl seemed to break into an admonishing mood.

She later asked: “Will you pledge that you will not shut down the Mueller investigation?”

“Well, I don’t pledge anything,” Trump said. “I don’t want to pledge. Why should I pledge to you? If I pledge, I’ll pledge. I don’t have to pledge to you.”

First lady Melania Trump said in a recent interview with ABC News that she doesn’t trust some people in the White House.

“I feel the same way. I don’t trust everybody in the White House, I’ll be honest with you,” the president told Stahl.

Stah asked whether Trump ever wonders about any White House staffer, “Is he wearing a wire?”

“Not so much a wire. I’m usually guarded,” Trump said. “I think I’m guarded anyway. But I’m not saying I trust everybody in the White House. I’m not a baby. It’s a tough business.”

“This is a vicious place,” Trump said. “Washington, D.C., is a vicious, vicious place. The attacks, the bad mouthing, the speaking behind your back. You know, and in my way, I feel very comfortable here.”

Trump has warmed up to NATO, made up of the United States and Western allies that assure one another of mutual defense, largely because more NATO members have agreed at his insistence to spend 2 percent of their annual gross domestic product on defense.

But Stahl pressed the president as if he were still hostile to NATO.

“Are you willing to get rid of that Western alliance?” Stahl asked.

“But you know what? We shouldn’t be paying almost the entire cost of NATO to protect Europe and then on top of that, they take advantage of us on trade,” the president added. “They’re not going to do it anymore. They understand that.”

Stahl: “Are you willing to disrupt the Western alliance? It’s been going for 70 years. It’s kept the peace for 70 years.”

“Is it true Gen. Mattis said to you, ‘The reason for NATO and the reason for all these alliances is to prevent World War III?’”

After more back and forth, Trump asserted: “I will always be there with NATO, but they have to pay their way. I’m fully in favor of NATO, but I don’t want to be taken advantage of.”