Don’t Believe Me Just Because I’m a Woman 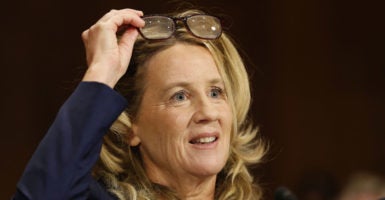 What if Christine Blasey Ford, here during her Sept. 27 appearance before the Senate Judiciary Committee, were instead a man named Christopher Ford who accused Brett Kavanaugh of attempted murder? (Photo: Michael Reynolds/SIPA/Newscom)

Almost one year ago today, I wrote about my own experiences with #MeToo and asked that everyone refrain from immediately and callously dismissing the men and women who come forward to share their stories. I said we should listen. And we should.

But I also explicitly said there was a time and a place to talk about false accusations and the excesses of #MeToo. I never implied that the act of listening with compassion meant unquestioningly believing all women, without rational analysis of the evidence.

I certainly never demanded that the world take my own story at face value just because I have a uterus.

If there was ever a time and place to talk about these things, it’s right now, on the heels of a Supreme Court confirmation battle saturated with claims that we #BelieveTheWomen.

Please, stop telling me to believe all women. I did not go to law school to abandon rational analysis and basic concepts of fairness just because a particular accuser lacks a Y chromosome.

Christopher Ford’s general testimony is that Kavanaugh, at a small gathering, drunkenly pushed him into a room and began smothering him with a pillow in a manner Ford thought was going to result in his death. All other facts are the same.

Despite offering a few vivid details he says are “seared into [his] memory,” Christopher Ford does not otherwise recall very basic details about the night, such as how he arrived at the party, how he got home from the party, or even where the party took place. He is initially unsure of the year or how old he was at the time of the alleged assault, which he now for the first time characterizes as “attempted murder.”

Ford’s earliest accounts consistently paint a time frame several years later than the one on which he settles for his final testimony. He cannot explain how, despite being unsure of the general time for years, he was able to narrow it down to the specific summer of 1982.

In his more recent letter to the Senate Judiciary Committee, he states that there were actually five individuals at the party—him, three boys, and his female best friend, all of whom he identifies by name.

But then, in his final testimony, Ford says there were four boys in addition to his female friend. He cannot remember the fourth boy’s name, and no one has come forward claiming to be this individual.

All four of the people Ford claims were at the party, including Ford’s best friend, deny having any knowledge of or remembering such a party taking place. Ford’s best friend denies having met Kavanaugh. There is no corroboration that Ford and Kavanaugh even knew each other or attended the same parties.

Christopher Ford tells The Washington Post that this encounter drastically altered his life, derailing him “substantially for four or five years” such that he “struggled academically and socially.”

Yet no friends, family members, teachers, or acquaintances come forward to corroborate that Ford noticeably struggled socially or emotionally during this time period. Ford doesn’t produce academic records verifying claims of a serious academic struggle. Indeed, he was accepted into and graduated from the University of North Carolina at Chapel Hill before earning three postsecondary degrees.

Christopher Ford’s description of the house and the details of the event also change substantially. Notably, the changed layout comes only after high school classmates point out the well-known party houses from the summer of 1982, none of which matches his original description.

His initial letter to the Judiciary Committee states that he heard Kavanaugh and his friend—Mike Judge—talking to partygoers downstairs while he hid in the bathroom after the alleged assault. He later testifies, however, that he could not hear them talking to anyone.

Christopher Ford further refuses to turn over to the Judiciary Committee very important documents, such as the full results of his polygraph and his therapist’s notes, even though he claims these documents corroborate his claims. We later learn that he took a polygraph on the day of or the day after his grandmother’s funeral (he can’t remember which), and that the format of the polygraph seriously differed from the accepted standard.

If this alternate reality were ours, where would the national conversation have been last week?

Would senators still have come out, prior to any examination of the evidence or semblance of a hearing, stating their unquestioning belief that a Christopher Ford was truthful?

Would we still largely fail to acknowledge that a Christopher Ford may have significant motivations to lie, or that his memory may be unintentionally but substantially altered by the historical ramifications of keeping Kavanaugh off the Supreme Court, with the possibility of Democrats taking back the Senate if they can just stall long enough?

Would we still ask Kavanaugh’s supporters why they would want him on the bench given the mere whiff of possible impropriety, however uncorroborated and however contrary to the experiences of every other person who has interacted with him on a regular basis over the past 36 years?

Of course not. And this is the problem—we shouldn’t believe either women or men when their claims are inconsistent with the facts and evidence.

I don’t know for sure that Christine Blasey Ford is lying about what actually occurred that night, or if she’s mistaken, or if she has greatly misremembered it.

What I do know is that if Ford were a man, and her accusations were about anything other than sexual assault, we almost certainly wouldn’t be having this conversation.

To unquestioningly believe all women—and to continue to believe them despite a complete lack of evidence where evidence should abound—is a measure of inequality we do not deserve. It is an injustice we should not bear. It is patronization we should not tolerate.

I promise you that women sometimes lie. They sometimes misremember. They are sometimes mistaken. And they sometimes do these things in situations far less societally complex and with far less at stake than the confirmation to the Supreme Court of a judge whose nomination (we are told) represents a serious threat to the life and liberty of millions, and whose supporters are (according to a sitting senator) “complicit in the evil.”

Why does this happen? Because women are human beings subject to the same frailties, limitations, and faults as are men.

I never imagined that this would be a controversial statement for which I would be chastised by self-described feminists. This is, rather, a principle fundamental to any concept of true equality: Women are human beings, too.

When it comes to analyzing our allegations of sexual misconduct, please treat us accordingly.