4 Lessons of the Kavanaugh Confirmation Fight 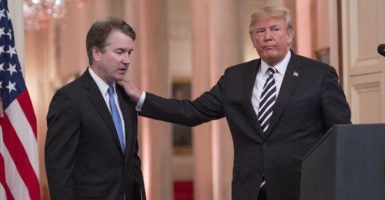 Legal experts say the fight over Justice Brett Kavanaugh’s nomination to the Supreme Court may have reached a low point in the history of the confirmation process.

But legal experts who spoke to The Daily Signal aren’t clear what the lessons are going forward. Some are more optimistic than others about what to expect from future Supreme Court nominations.

President Donald Trump nominated Kavanaugh, then a D.C. Circuit Court judge, to the Supreme Court in July. Later that month, Sen. Dianne Feinstein, D-Calif., received a letter from constituent Christine Blasey Ford alleging that Kavanaugh attempted to rape her when she was 15 and he was 17.

Feinstein revealed the existence of the letter after the Senate Judiciary Committee had concluded its confirmation hearings for Kavanaugh, delaying a committee vote on his nomination.

Kavanaugh strongly denied the charge from the start. Everyone else Ford identified as being at a teen gathering where she was attacked said they couldn’t recall such an event.

The accusation led to Ford’s testimony before the Judiciary Committee, Kavanaugh’s angry denial of this and subsequent allegations, and a seventh FBI background check on the nominee.

The Senate on Saturday voted mostly along party lines, 50-48, to confirm Kavanaugh, with Sen. Joe Manchin, D-W.Va. breaking with his party to vote for confirmation and Sen. Lisa Murkowski, R-Alaska, breaking with hers to vote “no” and then “present.”

Here’s a look at four potential lessons from the heated Kavanaugh confirmation fight.

Partisan politics could prevent any future Supreme Court nominee from being confirmed if the parties of the president and the Senate majority clash, said Ilya Shapiro, a senior fellow in constitutional studies at the Cato Institute and editor-in-chief of the Cato Supreme Court Review.

“I don’t see a way out. Each time it gets worse,” Shapiro told The Daily Signal. “This time Democrats used any means available to stop Kavanaugh. In the future, I don’t think a Supreme Court nominee will be confirmed if the opposite party of the president controls the Senate.”

Shapiro said the Supreme Court confirmation process has turned into a “circus.”

Shapiro said it was the Democrats this time, but noted Senate Republicans played hardball in blocking a hearing for President Barack Obama’s nomination of D.C. Circuit Judge Merrick Garland to fill the seat vacated in early 2016 by the death of Justice Antonin Scalia.

That said, he thought it unusual for Democrats to talk repeatedly about the failed nomination of Garland.

“It’s odd that Democrats would bring up Garland so often in this confirmation battle,” Shapiro said. “Garland was relevant to the [Neil] Gorsuch nomination, because that was filling the Scalia seat. To talk about Garland now made it seem they were upset about the last presidential election, that Hillary Clinton wasn’t nominating a justice.”

Democrats will not relent in the future, said Cleta Mitchell, a Washington lawyer for 40 years whose practice specializes in campaign finance and congressional ethics.

“Our lesson should be that nothing is off limits and we better be ready for the worst, as they will always sink lower than the last time—and the press will support the antics,” Mitchell told The Daily Signal. “That’s our new normal. We need to rethink our playbook as well, because we are not playing by the same set of rules any longer.”

“This is probably going to get worse, but I don’t think Republicans will do anything like this because I don’t think the media would give them wind to their back if they were trying to stop a Democratic nomination,” Gray told The Daily Signal.

During the Kavanaugh confirmation process, The New Yorker published the account of a woman who couldn’t supply corroboration for her story that Kavanaugh exposed himself to her at Yale. NBC News aired an interview with a third woman, who claimed without evidence that Kavanaugh was involved in multiple gang rapes at teen parties.

“The left would never ever keep doing these things if they did not know from the outset that the national media is going to support and go along with whatever outrageous misconduct they engage in,” Mitchell said.

She said the coverage would be different if a Democratic president’s nominee to the high court were hit with similar allegations with the same lack of evidence.

“All of this would grind to a halt if the media just once chastised the left for such tactics,” Mitchell said. “But the media does not do that. Journalists have become actors on the same stage … because the press shares the political views of the left-wingers.”

In the past, Republicans often have folded to media pressure—but not this time, Mitchell said.

“I think the main lesson all GOP leaders should learn from this is the example President Trump sets, of not backing down or backing off regardless of the brickbats and daily onslaught of negative press,” Mitchell said.

She said she hopes Republicans are willing to stand firm on other issues.

“Our GOP leaders did not fold this time, largely due to President Trump. And their solid and unwavering support for Brett Kavanaugh gave strength to the others,” Mitchell said. “That’s the main takeaway. When our leaders fight and stand strong, the rest will follow.”

There is only one way to make the fight over the high court less polarizing and divisive, Shapiro said. That’s by making the federal courts and federal government less powerful.

“It’s because too many decisions are made by the Supreme Court,” Shapiro said. “If power devolved from Washington to states and localities, then the Supreme Court would decline in importance.”

Sticking with the core debate about what a judge should and shouldn’t do is key to future confirmation issues, said Thomas Jipping, deputy director of the Edwin Meese III Center for Legal and Judicial Studies at The Heritage Foundation.

“Unelected judges are there to decide cases, not run the country,” Jipping told The Daily Signal. “If we are more diligent in keeping the debate focused on the real issue, the less impact the personal attacks will have.”

The left’s effort to block Kavanaugh’s confirmation, he said, demonstrated “certain political forces believe the judiciary should be all-powerful,” more so than elected branches of government.

“They are willing to change their principles and use different tactics because the only principle is power,” Jipping said. “We have to hold out some hope that the debate is about what judges will do and what they are not supposed to do.”

One thing that turned the Kavanaugh confirmation process into a circus was the protesters who stormed into buildings on Capitol Hill, cornering senators and sometimes shouting insults and threats, said Sidney Powell, a former federal prosecutor in Texas.

“There is no bottom to how low the Democrats will go to promote their agenda,” Powell told The Daily Signal. “The behavior of protesters was horrible and offensive. It should not be allowed in office buildings. They are showing their true colors and they are painfully ugly. They are digging their own graves.”

But this goes beyond a political problem, said J. Christian Adams, a former Justice Department lawyer, asserting that the threats and interruptions of Senate business amount to a federal crime.

“These are not protesters. It’s a crime to disrupt the U.S. Senate,” Adams told The Daily Signal. “The U.S. attorney for the District of Columbia, Jessie Liu, needs to start enforcing criminal law.”

“If the law isn’t enforced, it’s going to keep happening and get worse. It won’t stop at the Senate; they’ll disrupt the Supreme Court, too,” Adams said.

Such behavior is punishable upon conviction by a maximum of six months in prison, he said.

Violent entry and disorderly conduct.—An individual or group of individuals may not willfully and knowingly … enter or remain in the gallery of either House of Congress in violation of rules governing admission to the gallery adopted by that House or pursuant to an authorization given by that House … with the intent to disrupt the orderly conduct of official business … utter loud, threatening, or abusive language, or engage in disorderly or disruptive conduct, at any place in the Grounds or in any of the Capitol Buildings with the intent to impede, disrupt, or disturb the orderly conduct of a session of Congress[.]