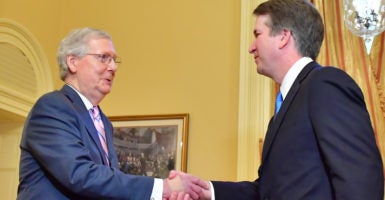 “Here’s what I want to tell you: Judge Kavanaugh will be on the United States Supreme Court,” Senate Majority Leader Mitch McConnell said Friday morning to conservatives assembled at the annual Values Voter Summit in Washington.

The Kentucky Republican counseled the crowd to “keep the faith” regarding nominee Brett Kavanaugh, vowing that the Senate won’t be “rattled” by what he characterized as Democrats’ obstruction.

McConnell’s remarks came as the Senate Judiciary Committee attempts to set up a fair hearing for a California woman who came forward only days ago to accuse Kavanaugh of sexually assaulting her at a house party when they were both teens in the early 1980s.

“President Trump has nominated a stunningly successful individual,” McConnell said of  Kavanaugh, a judge on the U.S. Circuit Court of Appeals for the District of Columbia since 2006.

McConnell’s confidence that Kavanaugh would prevail in the Supreme Court confirmation process was apparent when he referred to the federal appeals judge as “Justice Kavanaugh” at the end of his speech.

“We are living in historic times,” Tony Perkins, the organization’s president, said.

“A battle is raging on Capitol Hill over the court,” Perkins said. “The left … has turned to trying to control the courts to impose their values on America.”

Gil Mertz, assistant to Perkins and master of ceremonies for the summit, noted the situation with levity.

Mertz began by inviting Sen. Dianne Feinstein, D-Calif., to address the summit and joking, “but I guess that doesn’t give her a lot of time to prepare.”

It was a reference to Kavanaugh accuser Christine Blasey Ford’s refusal to testify before the Senate Judiciary Committee as requested this coming Monday after Feinstein, the ranking Democrat on the committee, declined to pursue Ford’s confidential letter making the accusation for about six weeks.

Mertz also pointed out what he suggested was Democrats’ inconsistency with regard to recent allegations of domestic abuse against Rep. Keith Ellison, D-Minn., who is also deputy chairman of the Democratic National Committee and the party’s nominee for Minnesota attorney general.

“Democrats are insisting that every accusation by a woman be taken seriously, and I know everyone in this room believes that,” Mertz said. “Where is the Democratic call for an investigation into Keith Ellison?”

“The most consequential decision of my career was to decide not to do something,” McConnell said, referring to his refusal to hold hearings before the 2016 presidential election on President Barack Obama’s nomination of D.C. Circuit Judge Merrick Garland to the Supreme Court.

McConnell also praised the Senate’s confirmation of 26 of Trump’s circuit court nominees, which he called the “fastest pace in our nation’s history” for confirming judicial appointees.