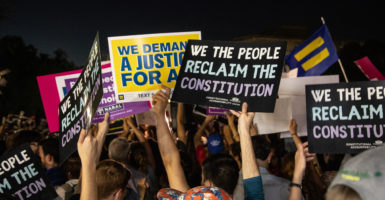 Yale Law School students and faculty wrote and signed an open letter to the dean Tuesday, criticizing Brett Kavanaugh’s nomination to the Supreme Court and saying that “people will die if he is confirmed.”

The authors and signers of the letter asked Yale Law School Dean Heather K. Gerken to “use your authority and platform to expose the stakes of this moment and the threat that Judge Kavanaugh poses.”

“[P]eople will die if he is confirmed,” the letter reads, adding that he is a “threat to our democracy.” The crux of the letter is a disavowal for the potential overturning of Roe v. Wade, which legalized abortion nationwide in 1973.

“Since his campaign launched, Trump has repeatedly promised to appoint justices who would overturn Roe v. Wade,” the authors added. “Overturning that decision would endanger the lives of countless people who need or may need abortions—including many who sign this letter.”

Kavanaugh, a Yale Law School alumni, is a staunch opponent to abortion and opponents have expressed concern that his presence on the Supreme Court could make overturning Roe v. Wade possible.

The authors of the letter allege that as a judge, Kavanaugh denied a “detained immigrant minor her constitutional right to abortion,” referencing Kavanaugh’s vote against allowing a 17-year-old illegal immigrant to get an abortion while in government custody. Ultimately, the teen was allowed to have the abortion, The Daily Caller reported.

Kavanaugh’s nomination “is a political choice about the meaning of the constitution and our vision of democracy, a choice with real consequences for real people,” the letter states. “Without a doubt, Judge Kavanaugh is a threat to the most vulnerable. He is a threat to many of us, despite the privilege bestowed by our education, simply because of who we are.”

Gregg Gonsalves, an associate professor (adjunct) of law and co-director of the Global Health Justice Partnership, was among Yale faculty that signed the letter. Gonsalves retweeted the letter on Tuesday after highlighting problems he saw with a Justice Kavanaugh.

Gonsalves lashed out on Tuesday against Yale’s statement on Kavanaugh’s nomination, writing on Twitter that it “praises his reasoning & scholarship even though the man’s intent is to destroy the legacy—on the ACA, LGBT rights—of those very faculty who praise him.”

Gerken wrote a letter Monday praising President Donald Trump’s nomination of Kavanaugh, saying that she can “personally attest that, in addition to his government and judicial service, Judge Kavanaugh has been a longtime friend to many of us in the Yale Law School community.”

“I have known Brett Kavanaugh for many years,” Gerken said. “Ever since I joined the faculty, I have admired him for serving as a teacher and mentor to our students and for hiring a diverse set of clerks, in all respects, during his time on the court.”

“Judge Kavanaugh is more of a originalist and that’s not a bad thing,” said Akhil Reed Amar, a professor at Yale Law School. “That is something that actually—I got my constitution here—who cares a lot especially about the text and the original history and understanding of the Constitution.”