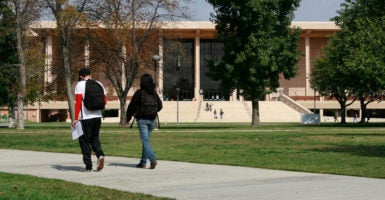 The bill would have required health centers in the University of California and California State University systems to provide abortion by medication. (Photo: pastorscott/Getty Images)

“According to a study sponsored by supporters of this legislation, the average distance to abortion providers in campus communities varies from five to seven miles, not an unreasonable distance,” Brown wrote in the veto letter. “Because the services required by this bill are widely available off-campus, this bill is not necessary.”

Senate Bill 320 would have required health centers in the University of California and California State University systems to provide abortion by medication starting in January 2022.

“The bill would provide that its requirements would be implemented only if, and to the extent that, a total of at least $9,600,000 in private moneys is made available to the fund in a timely manner on or after January 1, 2019,” SB 320 states.

The money would have gone to the College Student Health Center Sexual and Reproductive Health Preparation Fund, which would provide public universities the money in grant form to cover costs such as equipment used for medication abortion, staff training, and facility and security upgrades.

California Democratic Sen. Connie Leyva introduced SB 320 in 2017 to “benefit college students who may become pregnant and seek to terminate their pregnancy within the first 10 weeks.”

She said she plans on reintroducing the bill in the next session.

“Today’s #SB320 veto by @JerryBrownGov is a setback to a woman’s right to access abortion,” Leyva tweeted Sunday. “I fully plan to reintroduce this bill next session and will not stop until there is #AbortionCareOnCampus!”

Today's #SB320 veto by @JerryBrownGov is a setback to a woman's right to access abortion. I fully plan to reintroduce this bill next session and will not stop until there is #AbortionCareOnCampus! https://t.co/yC1SGL4GaW

Groups like Students for Life, a pro-life organization, expressed satisfaction with the bill’s veto.

“Thank you Governor Brown for VETOING #SB320,” Students for Life tweeted Sunday. “Abortion drugs do not belong on college campuses!”

Thank you Governor Brown for VETOING #SB320. Abortion drugs do not belong on college campuses!https://t.co/fqytnddS6s

Pro-choice organizations like Women’s Foundation of California said they were disappointed with the move.

“We are disappointed that Gov. Brown failed to support what the Senate, the Assembly, and 6 in 10 Californians already have recognized in this groundbreaking bill—that students of California need abortion care on campus,” CEO for the Women’s Foundation of California Surina Khan said in a statement.

The 6 in 10 statistic came from a survey conducted by Change Research, a polling organization, on behalf of pro-choice group NARAL. Nearly 57 percent of the 2,313 California voters were registered as Democrats, according to NARAL.

The Women’s Foundation of California focuses on racial, economic, and gender justice for women, according to the organization’s website.

Brown’s office and the Women’s Foundation of California did not immediately respond to The Daily Caller News Foundation’s request for comment.