Brexit Is Around the Corner. Here’s a Key Step to Renew the US-UK Special Relationship. 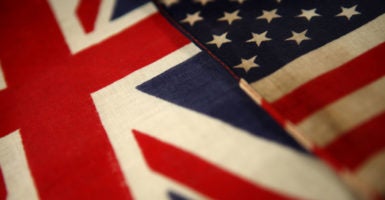 It is undeniable that the United States and the United Kingdom have a “special relationship.”

Throughout periods of global change, and in times of tumult and war, the Anglo-American relationship has been constant. We have stood beside each other through two world wars, the Cold War, and now in our confrontation with global terrorism in a shared pursuit of freedom, peace, and prosperity.

And our trading partnership has been a major element of that relationship.

Now, with the scheduled departure of Britain from the European Union, there is the possibility of a free trade agreement between the U.S. and the U.K., an opportunity that would immensely benefit our two nations.

Prior to this, we were not able to have true free trade with Britain precisely because it was a member of the EU. But after March 2019, when Britain is scheduled to make its departure, it will regain its freedom to make its own trade agreements.

On top of this, the U.S. economy is the largest in the world, while the U.K.’s is fifth largest. The size of our economies, combined with our significant trading relationship, would mean that a free trade agreement would significantly advance prosperity on both sides of the Atlantic. Competition would increase, and consumers would have more choices and lower prices. It would be a force generator for economic liberty through genuine bilateral free trade, based upon the principles of sovereignty and economic freedom.

Fortunately, several think tanks and scholars across the U.S. and the U.K. have collaborated to put together a free trade agreement. They have drafted a full, complete text for an agreement that makes significant progress toward the end of trade liberalization between our countries. And these scholars have proven that a full free trade agreement can be done.

This is exactly what we should be working toward as Britain moves to exit the EU. We ought to be supporting the decision of the British people, and taking steps to ensure that a post-Brexit U.K.—and the world—can realize the economic and strategic possibilities that full British sovereignty presents.

That is why I also worked with Sen. Tom Cotton, R-Ark., to introduce the United Kingdom Trade Continuity Act last Congress. Our bill would promote economic stability and growth as the U.K. transitions out of the EU by obligating the U.S. to continue and honor all existing commercial agreements with the U.K., and by calling on the president to initiate negotiations for new bilateral agreements with the U.K. 30 days after the bill is enacted.