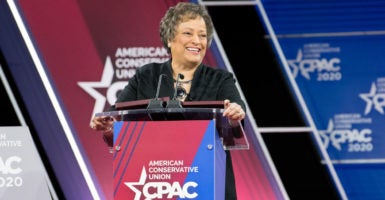 "The far left despises so much that they’re even willing to rewrite whether America is exceptional among the nations," Heritage Foundation President Kay C. James says Thursday at the Conservative Political Action Conference. (Photo: Erin Granzow for The Heritage Foundation)

America is only a republic if Americans can keep it, Heritage Foundation President Kay C. James told an enthusiastic crowd Thursday at the annual Conservative Political Action Conference, echoing the storied sentiments of Benjamin Franklin.

James delivered an invigorating speech designed to motivate conservatives to talk about their values with others and encourage them to vote.

“America needs our help to keep her special,” James said.

The stakes are high, as record attendance by “CPAC-ers” shows, she said.

“So many people in the news media, in our education system, and the entertainment industry are all working against us,” James said of conservatives. “But let me tell you. I know what many of them don’t, that we have a stronger will to win. And just like our Founders, we’re willing to work for a cause that’s greater than any of us.”

James emphasized the need for clarity and education from conservatives during a time of strong influence from the left.

She said activists on the left argue that free markets don’t work, free speech doesn’t matter and should be given up in the name of security and political correctness, and Americans need a larger, more intrusive government.

“Our students are told we’re the cause of the world’s problems like poverty and pollution and global warming,” James said. “In fact, the far left despises so much that they’re even willing to rewrite whether America is exceptional among the nations.”

James, who last year led Heritage’s work to publish a concise guide to conservative principles called “True North,” called on those at CPAC to help reverse the advance of the far left’s philosophy. She charged the audience with a few tasks to defend America:

—Call and write elected officials in their congressional districts on proposed legislation and visit their offices.

—Volunteer for candidates who will work for limited government, free market principles, and traditional American values.

—Multiply efforts to find neighbors, friends, church members, and others who need to register to vote.

—Educate those who don’t understand conservative values, and that includes rejecting the picture of America painted by the left, which neither centrists nor liberals want to live in.

“It’s OK to love this country. I love it,” James said. “We’re a truly blessed people. But right now, America needs our help to keep her special. We need you to stay in the fight.”