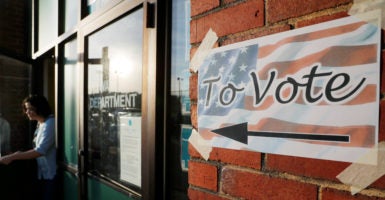 The House is expected to consider a resolution disapproving of cities and counties that allow noncitizens to vote. Pictured: A voter leaves a polling place Sept. 4 in Somerville, Massachusetts. (Photo: Brian Snyder/Reuters/Newscom)

The House of Representatives is set to vote this week on a resolution condemning voting by noncitizens and illegal immigrants as “devaluing” ballots cast by U.S. citizens.

The nonbinding resolution, presented last week by Majority Leader Kevin McCarthy, R-Calif., would make it the position of the House that “allowing illegal immigrants the right to vote devalues the franchise and diminishes the voting power of United States citizens.”

Update:  The House voted 279-72 Wednesday evening to adopt the resolution. A total of 69 lawmakers voted “present” and eight did not vote.

The resolution appears to come in response to the actions of several cities and counties, including Chicago, Cambridge, Massachusetts; and—in McCarthy’s home state—San Francisco, which passed legislation allowing noncitizens to participate in elections for local school boards.

“Unfortunately, a handful of cities like Cambridge, Chicago, and most recently San Francisco allow illegal immigrants to vote in local elections,” McCarthy, considered the front-runner to be the next speaker of the House, said in an emailed statement to The Daily Signal.

“These radical policies weaken the power of law-abiding Americans, including naturalized citizens,” the California Republican said.