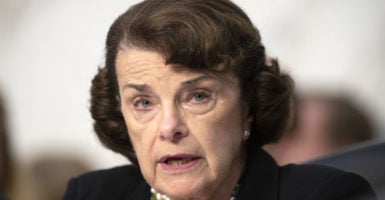 Back in 1991, after the Clarence Thomas confirmation hearings, I never thought I would have to again live through the dignity of the Senate and the Supreme Court being sullied by personal allegations against a nominee, allegations specifically concocted by political enemies to demean the process and sully the accused.

Much has been made in the media about the price professor Christine Blasey Ford will have to pay, both personally and professionally, for coming forward to air her grievances against Judge Brett Kavanaugh during the latest Supreme Court confirmation fight.

The prognosticators on the left are right, of course. Ford is almost certainly going to suffer damage as a result of this sad spectacle—perhaps irreparably, if history is any gauge. However, what they fail to mention is that it is they—the Democrats—who will destroy her.

Despite Sen. Dianne Feinstein’s protestations otherwise, it is nothing for the Democrats to use Ford as their witting political pawn and then discard her when they are finished. She will go back to her life, to a fate worse than obscurity, an almost untouchable world of isolation. Once the glare of the cameras has subsided, Ford still won’t have the justice she craves.

What is so tragic about this scenario is that she will ultimately have no one to turn to. When all is said and done, there is no Democratic pension fund for the victims of political wars. As time goes by, the Democrats will trot Ford out to signify their faint allegiance to principles of justice and fairness, to women’s rights, to the plight of the sexually abused.

One need to look no further than the cases of Charlie Rose, Al Franken, and Matt Lauer, all darlings of the left-wing establishment who were sacrificed on the altar of political correctness, to realize that the left’s glib lip service to women’s rights and the #MeToo movement are but faux furies signifying nothing.

But don’t take my word for it. Look at what happened to Anita Hill in 1991. The Democrats used and discarded her.

Then-Sen. Joe Biden, who chaired the Senate Judiciary Committee at the time, played the coy and almost naive inquisitor—pretending not to know it was his fellow Democrats who had decided to trot Hill out like a lamb to the slaughter. His management and conduct at the hearings constitute one of the most deplorable political performances in recent memory.

Hill herself, who was once a rising conservative legal star, found herself homeless, in Washington terms. She no longer had a home on the right, and the left would never have embraced a conservative woman during that time in our history, with her politics. Hill receded to obscurity, all that Yale education and hard work squandered.

A similar fate awaits Ford if we do not do something to address the broken political process while we still have time. For one thing, we have to address the virtual cottage industry of politicians and lawyers that exists for the sole purpose of exploiting sexual harassment allegations for partisan political gain.

Not surprisingly, these very same people staunchly defended former President Bill Clinton when he faced more credible and substantiated allegations of ongoing sexual impropriety with his staff and other women. This just goes to show how deep-seated hypocrisy permeates the Democratic establishment.

They trot out decades-old allegations against Kavanaugh without even a scintilla of corroborating evidence other than the word of an unvetted accuser, and in the same breath they staunchly defend the reputation of someone of their own party and political persuasion who has been accused of far more numerous and recent incidents of misconduct.

Secondly, there is the senatorial process itself. Feinstein—ironically honored in 1992’s “Year of the Woman,” in the wake of the Hill hearings—chose to keep Ford’s allegations in her back pocket until the last minute. Feinstein says she did this to “protect” Ford.

The more reasonable and likely explanation is that Feinstein’s staffers assured Ford, through her politically selected legal counsel, that she would never have to testify. They thought they could use the mere allegation as a cudgel to force the administration to withdraw Kavanaugh’s nomination. At this point, it is clear they miscalculated the administration’s response.

It used to be that nominees to the Supreme Court got subjected to ideological litmus tests, and that was enough. Their personal lives had already been vetted long before they reached that stage of the game—when applying to law school, when applying to the bar, when applying to the various governmental and judicial appointments that preceded their candidacy for the highest court.

By the time they reach the Supreme Court nomination stage, unless there is some new and credible allegation of recent disqualifying personal behavior, such past issues should have been put to bed.

What we are ultimately doing is creating a nation of hypocrites. In a world where lifelong perfection becomes the expectation, we will have supposedly infallible politicians setting a bar impossible for their political adversaries to overcome.