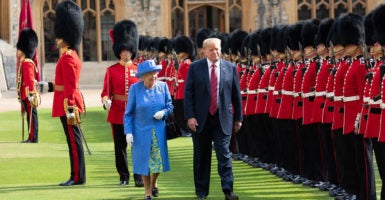 Published by the Cato Institute, and its primary authors, Dan Ikenson and Simon Lester of Cato, it is not a plan for a free trade area, or a plea for one. It is the actual text of an agreement. The governments of Britain and the United States could sign it tomorrow.

If Britain hadn’t been in the European Union since 1973, the U.S. and Britain would have free trade now. But as long as it remains in the EU, Britain doesn’t control its own trade policy. When Britain exits in less than a year, it will take back that control.

And in both Britain and the U.S., the public wants to use the freedom to do a deal: Polls show overwhelming support for a U.S.-U.K. trade agreement.

Britain is a G-7 economy. It is the world’s second-largest exporter of services. British firms already employ over a million Americans. And above all, Britain is, in effect, a new player in world trade policy.

Although Britain is going to make up its own mind about what to do, it’s likely to want many of the same things that are also in the interests of the United States.

But as China and the EU in their different ways do their best to restrict competition, the U.S. and Britain can stand together to show that there is another way, a way that respects both national sovereignty and economic freedom.

In keynoting the launch, Sen. Mike Lee, R-Utah, pointed out that the U.S. and Britain share a lot of history, in war and in peace. It is that history which makes a free trade agreement between our two nations both desirable and possible.

This will not be an exclusive arrangement—as Dan Hannan, member of European Parliament and president of the Initiative for Free Trade, said in his remarks, it should immediately be open to Australia, New Zealand, Singapore, Hong Kong, and Israel, and in time to other nations.

But first the U.S. and Britain have to make a start. The text of the agreement is legalese—as it must be—but the summary presents the benefits of a deal clearly and simply. It may well be a guiding light for Britain as it exits the EU, and for a U.S. administration that rightly speaks often about its desire to negotiate a free trade agreement with Britain.