7 Big Takeaways From That Special Election in Pennsylvania 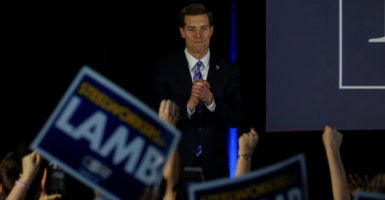 Little more than 600 votes out of more than 227,000 cast separate the top two candidates in the special election for a House seat in Pennsylvania, as Democrat Conor Lamb maintained a slim lead over Republican Rick Saccone, with no official winner.

Lamb, 33, is a Marine and former federal prosecutor. Saccone, 60, an Air Force veteran, is a Pennsylvania state representative and expert on North Korea.

Here are seven key takeaways from the outcome of the election Tuesday and what to expect next in a congressional district President Donald Trump won by 20 percentage points.

But Saccone said he wouldn’t concede and wants every legal vote counted.

The Associated Press had yet to call the race as of late Wednesday.

The AP reported that at least 200 absentee ballots had not been counted by early Wednesday, and an unknown number of provisional ballots also exist.

The four counties that make up the 18th Congressional District in the Pittsburgh area have seven days to count the provisional ballots.

CONGRATULATIONS are in order for @ConorLambPA and Pennsylvania Democrats — they just made history and FLIPPED #PA18, a district Trump won by 20 points!!!

RT if you’re ready to repeat this victory, district by district, all across the country! pic.twitter.com/y9mBEQFSpa

With such a close margin, supporters of either candidate may ask for a recount, under Pennsylvania law.

“We will have to see if a recount leads to a challenge of the result,” Kyle Kopko, an associate professor of political science at Elizabethtown College in Pennsylvania, told The Daily Signal.

“I’d rather be Lamb now than Saccone,” Kopko said. “But it’s so close, after a recount it could still go either way.”

“We don’t always get a Libertarian candidate, but it’s probably safe to say most of those votes would have gone Republican,” J. Wesley Leckrone, associate professor of political science at Widener University in Chester, Pennsylvania, told The Daily Signal.

“That’s not to say a 1 percent victory would bode well for Republicans,” Leckrone said. “But I know a lot of disenchanted Republicans who just vote Libertarian because they won’t support the Democrat.”

Drew Miller, the Libertarian, has more votes than Lamb’s margin.
He may have been the difference in the race.

The House seat opened to begin with because Rep. Tim Murphy, a Republican who first won it in 2002, resigned in disgrace. A pro-life politician, Murphy left the House after he was found to have asked a woman with whom he was having an extramarital affair to get an abortion.

“Tim Murphy’s behavior was a very hypocritical matter to say the least, and that really harmed the Republican brand,” Kopko said. “It is an important consideration in a conservative area.”

Leckrone said he was uncertain about the impact of the Murphy scandal.

“It increased the cynicism toward government, that politicians are two-faced,” Leckrone said. “It certainly didn’t increase energy on the Republican side.”

Trump stumped for Saccone in Pittsburgh the Saturday before the election, delivering a characteristically rambling speech before a huge crowd.

Vice President Mike Pence also visited the district to campaign for the GOP candidate. So did one of the president’s sons, Donald Trump Jr., and daughter Ivanka Trump on separate occasions.

Some see Saccone’s apparently narrow loss as more alarming for the president because Trump carried the 18th Congressional District by about 20 points, while past Republican presidential nominees also won the district by double digits.

“To see that big of a swing, to go to neck-and-neck, is worrisome for Republicans in Pennsylvania and maybe throughout the Rust Belt,” Kopko said.

However, the Trump visit likely helped make the race more competitive for Saccone, Kopko added. He noted that the president remains popular in the district and that recent polls showed Lamb, who had union backing, leading by six points.

“The president’s party usually suffers in midterm cycles,” Geoffrey Skelley, political analyst for the Center for Politics at the University of Virginia, told The Daily Signal. “We have seen Democrats all over the country outperforming Hillary Clinton by eight or nine points in generic polls.”

Since Trump took office, Republicans have won four special congressional elections in early 2017 in Georgia, Montana, Kansas, and South Carolina. A Democrat won an open seat in California, but was expected to do so.

However, Democrats won convincingly in the 2017 Virginia governor’s race and in down-ticket contests, while also pulling off a surprise win for a U.S. Senate seat in Alabama.

“Nationally, this is a serious problem for President Trump, losing another special election, and it follows a pattern of data that portends a bad Republican year,” Leckrone said.

Lamb drew attention for saying he would oppose House Minority Leader Nancy Pelosi of California as leader of the Democratic caucus. Lamb even talked about it in a campaign commercial.

“It could help Democrats make inroads with a broader group of voters by replacing Pelosi,” Kopko said. “There are very few people that don’t have a preconceived notion of what she stands for.”

Republicans nevertheless sought to tie Lamb to Pelosi during the campaign.

“If Democrats are running away from Pelosi, it’s not an attack that will resonate with voters,” Leckrone said. “Lamb and other Democrats could triangulate, as Bill Clinton used to.”

However, Skelley said he is doubtful any Democrat could challenge Pelosi, and questioned whether freshman Democrats would vote against her since they would fear the consequences.

Some Republicans blamed Saccone for being a poor choice compared to the more telegenic and energetic Lamb. Trump reportedly believed Saccone to be a “weak” candidate.

Lamb raised $3.9 million, while Saccone pulled in only $615,000, as Politico reported. Saccone, however, received more than $10 million from conservative groups outside the state.

“Lamb outraised Saccone about 4 to 1, which says something about Saccone’s strength,” Skelley said. “But he was an elected official in Pennsylvania. Saccone was not Roy Moore. But Lamb was a shiny object Democrats were looking for.”

Skelley was referring to Roy Moore, the scandal-plagued Republican nominee for the Senate seat in Alabama. Moore lost to Democrat Doug Jones in the special election in December.

But Skelley said he thinks that in a more polarized political climate, voters are looking at party label.

“In this very partisan environment, the letter by the candidate’s name matters,” Skelley said.

Opioid abuse has been a problem in the district, and how each candidate addressed it mattered, Leckrone said.

“Lamb talked about treatment for addicts he said were pushed into this, while Saccone took a more traditional tough-on-crime approach,” Leckrone said.

“This could be a wedge issue for middle-class voters that won’t break down along traditional Republican and Democratic lines,” he said. “Opioids are not like crack and cocaine, and are a much more mainstream problem.”

Intriguingly, the 18th Congressional District will not exist in its current form by the November general election. The Pennsylvania Supreme Court ruled that the state’s congressional districts can’t all be gerrymandered to benefit a single party.

A recount, Kopko noted, “could delay things for months in a district that is only going to be in place for another seven or eight months.”

“We will have new congressional districts in Pennsylvania by November,” Kopko said. “It’s theoretically possible that both candidates will be serving in Congress together, from different districts.”