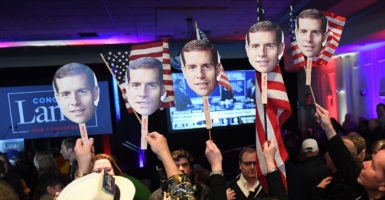 Democrat Conor Lamb appears to have captured a tight victory in a special election for a Pennsylvania U.S. House seat. But the final verdict still hinges on absentee and provisional ballots.

As of Wednesday morning, the Associated Press is not calling the race. However, Lamb has declared victory, as has the Democratic Congressional Campaign Committee.

Republican Rick Saccone vows he is not yet giving up until the votes are counted.

The AP reports Lamb had a 641-vote lead over Saccone, out of about 224,000 votes cast. But, the AP says, there are at least 200 absentee ballots not yet counted, and an unknown number of provisional ballots.

The Keystone State’s 18th Congressional District race was viewed as a harbinger for what might happen in the midterm congressional races in November. President Donald Trump won this district overwhelmingly in 2016.

Over the weekend, Trump campaigned for the Saccone in Pittsburgh, and called the Democratic contender “Lamb the sham.”

>>> Related: 7 Big Takeaways From That Special Election in Pennsylvania

In early tabulating of ballots, Lamb opened up a significant lead. However, as more and more votes rolled in, the two candidates were within less than 1 percent. The Libertarian candidate Drew Miller won more than 1,300 votes.

Lamb, a former federal prosecutor, is a Marine veteran and the grandson of a former majority leader of the Pennsylvania state Senate.

Lamb ran as a moderate Democrat, asserting he would not support House Minority Leader Nancy Pelosi, D-Calif., in leadership and has opposed gun control measures. And he hasn’t attacked Trump of taken up the “resistance” banner. But he supports abortion rights.

Saccone, 60, is a Republican state representative, and was an early Trump supporter in the presidential race. Saccone is an Air Force veteran and former counterintelligence officer. He is also an expert in North Korean affairs.

The district’s largest newspaper, the Pittsburgh Post-Gazette, endorsed Saccone for the congressional seat.

Still, Trump reportedly believed Saccone was a “weak” candidate, while other Republicans said he lacked the telegenic personality of his younger opponent. Saccone also said that Democrats have “hatred for our president,” “hatred for our country,” and “hatred for God.”

Also, Lamb raised $3.9 million and spent $3.1 million, according to CNN. Saccone just $615,000. Saccone, however, received more than $10 million from conservative groups outside the state.

The state of Pennsylvania was key to Trump’s victory in 2016. And besides the president, Vice President Mike Pence also campaigned for Saccone, while former Democratic Vice President Joe Biden stumped for Lamb.

Since Trump came into office, Republicans won four special congressional elections in early 2017 in Georgia, Montana, Kansas, and South Carolina. A Democrat won an open seat in California, but was expected to do so. However, Democrats won convincingly in the 2017 Virginia governor’s race and in down ticket contests, while also pulling off a surprise win for a U.S. Senate seat in Alabama.

Whoever the winner is will serve out the remainder of former Rep. Tim Murphy’s term, after Murphy—first elected in 2002—resigned over a sex scandal in October.

The 18th Congressional District in Western Pennsylvania stretches across southwest suburbs of Pittsburgh. Trump won the district by 20 points and previous Republican presidential nominees won it by double digits.

The Pennsylvania Supreme Court ruled that districts can’t be too gerrymandered to benefit a single party. So, it’s likely the existing district will not exist in its current form by the November general election. Lamb would reportedly aim at running in the 17th Congressional District. Saccone reportedly said he would aim toward running in the state’s 14th Congressional District.