Why Small Businesses Are More Optimistic Than Ever Before 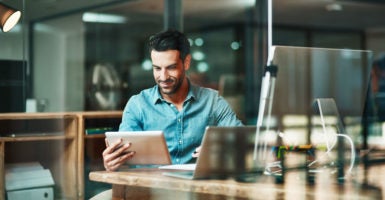 Small business optimism, as measured by the National Federation of Independent Businesses, hit an all-time high in August, shattering a 35-year-old record.

The good news comes amid the Trump administration’s rollback of business-stifling regulations and the recent tax cuts for businesses. Both have greatly increased small business owners’ chances at success.

It costs much more, in relative terms, for smaller businesses to comply with regulations, so when regulations are cut, small business benefits most. Tax cuts allow small business owners to keep more of their own money to reinvest in their enterprises, which gives them more opportunities to thrive and makes them more confident about their future.

In December 2016, the Index jumped 8 [more] points to 105.7, virtually equal to its average reading since then of 105.8. At the beginning of this historic run, the Index gains were dominated by expectations: good time to expand, expected real sales, and expected business conditions. Now the Index is dominated by stuff that makes [gross domestic product] grow: job creation plans, job openings, strong capital spending plans, record inventory investment plans, and, earnings. Small business is clearly helping to drive that ‘4 percent growth’ in the domestic economy [in the second quarter of 2018].

In short, the great sense of relief that settled over small business owners—mostly because the people in Washington who had said: “If you’ve got a business, you didn’t build that,” were leaving—has translated into tangible job creation and booming economic times thanks to the business-friendly policies of President Donald Trump.

As seen in The Heritage Foundation’s Index of Economic Freedom, the U.S. encountered a large drop in economic freedom during the Obama years. The Small Business Optimism Index was also below its historical average during those years. The Trump administration’s recent unshackling of economic freedom is why small business optimism has reached all-time highs.

Now, the Trump administration should capitalize on this new momentum for growing economic freedom, not disrupt it with protectionist trade policy. Reducing the corporate tax rate was an important step to freeing capital for investments in the U.S. Cutting government spending is equally critical to enhancing economic freedom and improving overall economic performance.

Changes to trade policy alone are unlikely to reduce the trade deficit and could, in fact, widen it if other countries respond to U.S. protectionism with trade restrictions of their own. Such a course of events would lead to lower growth and reduced prosperity for U.S. individuals and businesses.

Delivering on policies that will promote economic freedom in the U.S., whether they increase regulatory efficiency or expand market openness, will make the U.S. economy expand more and elevate small business optimism to an even higher degree.