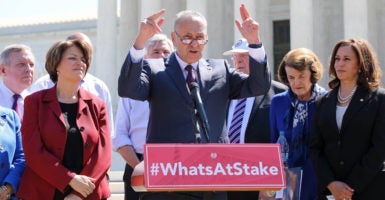 Senate Democrats have President Donald Trump’s attention with their historic level of procedural delays to stall the seating of judges and start dates for nominees to key executive branch posts.

Trump fired off a tweet Monday aimed at Senate Minority Leader Charles Schumer, D-N.Y., complaining about 193 nominees awaiting consideration by Senate committees, while 127 others await a vote on the Senate floor.

Chuck Schumer is holding up 320 appointments (Ambassadors, Executives, etc.) of great people who have left jobs and given up so much in order to come into Government. Schumer and the Democrats continue to OBSTRUCT!

Compared to his four immediate predecessors, Trump has the fewest Senate confirmations at this point in his presidency, with 582 nominees confirmed out of 986—or 59 percent.

The Senate has used the cloture rule to force at least 30 hours of debate on 112 nominees, more than Trump’s four immediate predecessors combined.

Trump is in the ninth month of his second year as president. The Senate invoked the cloture rule for nominees a combined 32 times during George H.W. Bush’s entire four years as president and the first terms of Bill Clinton, George W. Bush, and Barack Obama.

Trump’s frustration comes as his second nominee for the Supreme Court, D.C. Circuit Judge Brett Kavanaugh, is likely headed toward approval by the Senate Judiciary Committee and a successful confirmation vote on the Senate floor.

The Senate also was expected to vote this week on Trump’s nomination of Charles Rettig as commissioner of the Internal Revenue Service.

Although Democrats are in the Senate minority, the chamber’s rules allow the minority party to use procedures to block votes on legislation or nominees.

The Senate eliminated the filibuster as a way to stall a president’s nominees. The filibuster allowed continued debate without a specific time limit, which could permanently block a vote from occurring.

By contrast, the Senate’s cloture rules allow the minority to push for the maximum 30 hours of debate for each nominee. So, the cloture vote can’t prevent a vote from taking place, but it slows down the rate at which nominations can come to a floor vote, gumming up the works.

The White House notes that at least six Trump nominees who ultimately were confirmed with more than 95 votes had endured the maximum 30 hours of debate.

Schumer’s office did not immediately respond to phone and email inquiries from The Daily Signal.

Trump has sent 986 nominations to the Senate since becoming president on Jan. 20, 2017, slightly fewer than his three immediate predecessors, according to the White House. Obama sent 1,016 in the same period, the younger Bush 1,106, and Clinton 1,079.

The elder Bush, who kept many Reagan administration appointees in place, had made 859 nominations by this point in his presidency.

“The partisanship just makes it harder to fill,” said Stier, president of the Partnership for Public Service, a nonpartisan research group that tracks nominations.

Stier noted, however, that there is plenty of blame to go around because Trump was slow early in his presidency to make nominations.

The president also has had unprecedented early turnover in his Cabinet, Stier said. The Senate prioritizes filling the top spots, which further stalls confirmations for lower-level nominees.

Trump has made changes at the top of the State Department, the FBI, the Department of Health and Human Services, and the Environmental Protection Agency.

“The Senate is a small pipeline early in the term; you don’t move all of them through,” Stier said. “It’s not just a Republican and Democrat problem, it’s a president and Senate problem.”

Among those still awaiting confirmation are 44 nominees for ambassadorships, according to the Partnership for Public Service.

Of this more select group of nominees, the Senate has confirmed 357 so far in the Trump administration.