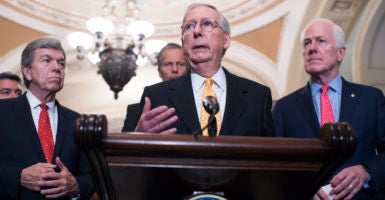 Since March, Senate Democrats have forced 30 hours of debate on each of five of President Donald Trump’s federal district court judge nominees subsequently approved with at least 95 votes.

District court judges—the first jurists to rule on often contentious cases—have been stalled, but Senate Republicans plan this week to keep the Senate in session long enough to confirm a dozen of them before Labor Day.

Of the 179 current and known future federal court vacancies, 160 are on district and specialty courts, according to the Judicial Crisis Network, which monitors judicial appointments.

Senate Majority Leader Mitch McConnell, R-Ky., announced the Senate will stay in session ahead of the holiday week to vote on 12 judicial nominees and on other appointees.

“Currently before us are nominees to be an assistant secretary at the Department of Health and Human Services, a vice chairman for the Federal Reserve, important posts at the departments of Justice and Treasury, and a slate of impressive nominees for the federal judiciary,” McConnell said on the Senate floor Tuesday.

The Senate on Tuesday confirmed Richard Clarida, of Connecticut, to be vice chairman of the Federal Reserve for a term of four years. The vote was 69-26.

“I hope we can continue to make progress,” McConnell said.

The slowdown is a result of Senate Democrats’ requiring 30 hours of debate for every nominee, even those who clear the Judiciary Committee unanimously or nearly unanimously. The tactic forcing a cloture vote to cut off debate is used because Democrats can no longer filibuster nominees.

McConnell noted in a tweet last week how many Trump nominees have been stalled, compared with past presidents.

Historic Obstruction. @POTUS‘s nominees have already been subjected to more than four times as many cloture votes as the nominees of his six most recent predecessors combined in their first two years. pic.twitter.com/vIiQfg9vlB

“There is a vacancy crisis at the district court level,” Thomas Jipping, deputy director of the Edwin Meese III Center for Legal and Judicial Studies at The Heritage Foundation, told The Daily Signal. “Historically, this tactic has only been used for the most controversial nominees. Now, it’s only being used to delay and gum up the works.”

It used to require 60 votes to stop a Senate filibuster and move to a floor vote on a judicial nominee. But in 2013, the then-Democratic majority in the Senate did away with the filibuster for district and appeals court judges and executive branch nominees.

During the 2017 confirmation process for Supreme Court Justice Neil Gorsuch, the Republican majority also eliminated the filibuster for high court nominees. So, the cloture procedure has become the delaying tactic of choice.

Thus far, 110 Trump nominees have been stalled by the Democratic tactic.

It would require votes on at least 10 judges per week for the rest of the year to confirm all of Trump’s nominees for the district and circuit courts, Jipping said. He said it’s possible the Senate would take action in a lame-duck session after the November midterm elections.

The Senate will be voting on the following judicial nominees this week, according to McConnell’s office:

Senate Republicans have prioritized confirming appeals court nominees, which are more likely to decide on constitutional issues. Still, the majority of legal cases are decided at the district court level, and most aren’t accepted on appeal.

Large vacancy rates have a big impact on the administration of justice, noted Curt Levey, president of the Committee for Justice, a conservative legal group.

In the past year and a half, district judges also played a significant role in blocking much of the president’s policies on border enforcement, restricting travel into the United States from certain countries, and restricting funding for cities that don’t assist in federal immigration enforcement, he said.

“District judges can yield enormous power against everything President Trump does, and slow down his policies for a couple of years,” Levey told The Daily Signal. “More confirmations mean there is less chance of a ‘resistance’ judge.”

The Senate also will be voting on the following executive branch nominees, according to McConnell’s office: