Here’s How Far Behind Trump Is on Political Appointments Compared to Obama, Bush 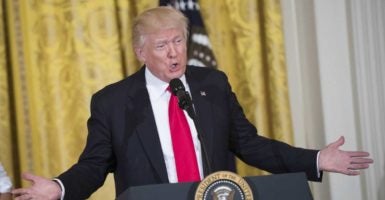 President Donald Trump speaks at an event Friday that honors military mothers at the East Room of the White House. (Photo: Kevin Dietsch/UPI/Newsom)

President Donald Trump has begun to move on naming federal judges and will eventually be naming a new FBI director, but more broadly, he remains slow in filling political appointments compared to his predecessors.

Trump, so far, is leaving key management positions unfilled, said Mallory Barg Bulman, vice president of research and evaluation at the Partnership for Public Service, the parent organization to the Center for Presidential Transition.

“Leadership matters a lot, as does having the right people in place,” Bulman told The Daily Signal. “You can’t start the game until the whole team is on the field.”

Trump has no nominee for 460 of the 557 key leadership positions, as of Friday, according to Partnership for Public Service. Trump has nominated 49, announced the nomination of 19, and 29 people have been confirmed.

“We’re actually going through the Office of Government Ethics and FBI clearances before announcing most of these individuals,” Spicer said at the Monday press briefing. “And so, there’s a little bit of a difference in how we’re doing this. But we are well on pace with respect to many of these [appointments] to get the government up and running.”

Trump has not yet even named a director to run the Office of Personnel Management, which manages the federal workforce, noted Robert Moffit, a former assistant OPM director under President Ronald Reagan.

“The bottom line is that the president can’t run the federal government out of the White House and secretaries can’t run giant agencies huddled in an executive suite,” Moffit, now a senior fellow for health policy at The Heritage Foundation, told The Daily Signal. “Unilateral disarmament is a victory for the swamp. The swamp creatures have won the fight. Unless you control the bureaucracy, the bureaucracy controls you.”

Moffit, who also worked in the Reagan administration’s Department of Health and Human Services, said Reagan took control of the federal bureaucracy shortly into his presidency.

He said congressional relations is a key area where political appointees should be working, instead of leaving it to career civil service employees in some cases. That’s because, Moffit stressed, it’s the job of the career civil service employees to execute administration policy but the job of political appointees to advocate and explain those policies to Congress.

The president can name about 4,000 political appointees.

Out of that, 1,242 are key leadership positions that need Senate confirmation, according to the Partnership for Public Service. Another 472 political appointees—largely White House staff—don’t require Senate confirmation, according to the partnership. Further, 761 non-career senior executive positions can be filled throughout the executive branch—though not all are presidential appointees. Finally, 1,538 non-career federal employees report directly to a presidential appointee.

The partnership did not have a final number on how many of these positions are filled or unfilled, because it only tracks key leadership positions—most of which require Senate confirmation.

The White House Transition Project measures a different metric, but still finds Trump well behind other presidents going back through Reagan. Trump officially fell behind in March, said Terry Sullivan, a political science professor at the University of North Carolina, Chapel Hill, and the executive director of the project.

Rather than measuring 4,000 jobs, which includes all U.S. marshals, U.S. attorneys, and every inconsequential U.S. ambassador, the White House Transition Project looks primarily at 221 government appointments that are required for the essential function of government, have policy roles, and have the potential to be controversial, Sullivan said.

“This is not a result of a policy predisposition to shrinking government,” Sullivan told The Daily Signal. “He wants a tax cut but he isn’t staffing up the Treasury Department. He doesn’t want more EPA regulations, but he isn’t moving slower or faster with that agency than Veterans Affairs or Health and Human Services, things he cares about.”