Trump Received a Loss in Court Battle With Unions. He Should Keep Fighting. 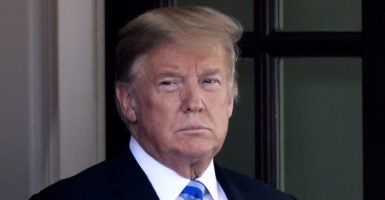 But late last month, in a textbook case of judicial overreach, D.C. District Court Judge Ketanji Brown Jackson sided with the unions and struck down every major provision of those executive orders.

The administration must appeal that decision. If it goes unchallenged, it will put the management of the federal workforce beyond the reach of the president.

To read Jackson’s opinion, one would think the federal government’s labor law was little more than a series of vague epigraphs on the virtues of collective bargaining and the importance of negotiating in good faith.

In fact, labor-management relations are governed by clearly specified statutory provisions—none of which were violated by Trump’s executive orders.

In her opinion, Jackson, an appointee of President Barack Obama, contends that the new limits that Trump’s executive orders impose on the use of “official time”—time during which federal employees are paid their regular wage to conduct union business—are impermissible.

She also claimed Trump does not have the authority to curtail federal employee unions’ use of federal office space and computers.

Indeed, the main statute that governs federal labor relations states in its opening section that “labor organizations and collective bargaining in the civil service are in the public interest.” But Congress did not mean this unremarkable statement of purpose to supersede all the particulars of the legislation.

The law does not leave it to judges like Jackson to determine what tools labor unions need to be effective.

The statute explicitly lists certain rights and procedures to safeguard unions. These do not include free office space, unlimited paid time off to conduct union business, or any of the other federal union protections that Trump’s executive orders rolled back.

Jackson also struck down Trump’s efforts to limit the subjects over which agency leadership and labor leaders are allowed to bargain.

Agencies are not required by law to bargain over issues identified as “permissive subjects”—a category that includes the number, type, compensation level, and duties of employees, as well as intra-agency disciplinary procedures—but they can do so if they choose.

Trump’s Executive Order 13836 prohibits agencies from bargaining over any of these permissive subjects. Past presidents have issued similar orders. Since the law does not require, nor forbid, agencies to bargain over these issues, it is perfectly permissible for presidents to guide how agency leadership uses statutory discretion.

While Jackson concedes that Trump’s executive orders only forbid negotiations over permissive subjects, nonetheless, she claims this provision violates the law.

Even without imposing limitations that specifically and directly conflict with individual statutory prescriptions, there can come a point at which an agency (or, in this case, the President) diminishes the scope of bargaining such that the only acceptable conclusion is that the agency’s conduct violates the [statutory] requirement that the parties ‘bargain in a good-faith effort to reach agreement with respect to the conditions of employment affecting such employees.’

Put another way, by taking so much off the table before the onset of negotiations, Jackson argues that the Trump administration foreclosed the possibility of good-faith bargaining.

The fact that the law directly states agencies are not obligated to negotiate over the subjects touched by the Trump executive orders does not seem to matter.

Questions like these arise from Jackson’s puzzling opinion, not the law. On a plain reading of the statute, Congress did not intend for “agencies and unions to engage in a broad and meaningful negotiation over nearly every ‘condition of employment,’” as Jackson claims.

On the contrary, Congress goes to great pains to clarify that agencies are under no obligation to negotiate with unions over the wide array of permissive subjects explicitly enumerated in statute.

This is not the first time that an activist judge has twisted statutory language to forestall Trump’s lawful use of executive power. The Trump administration should push this case to the Supreme Court, if necessary.

As with Trump’s travel ban, the administration will have the stronger case and will likely prevail before an impartial judge.