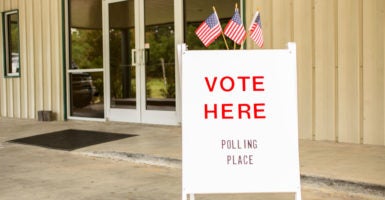 Eighteen of the 19 individuals who allegedly voted illegally in North Carolina had registered at local Department of Motor Vehicle locations. (Photo: fstop123/Getty Images)

Foreign nationals who were indicted on Aug. 24 for allegedly voting illegally in North Carolina are still on the voter rolls and officials are struggling to take them off.

Eighteen of the 19 individuals who allegedly voted illegally had registered at local Department of Motor Vehicle locations, according to The Washington Times Monday. Four were registered as Republicans, one unaffiliated, and 13 as Democrats.

One of the indicted, Elvis David Fullerton, voted in 16 elections over nearly two decades, according to the Times. Many voted on or before Nov. 8, 2016, according to the U.S. Attorney’s Office for the Eastern District of North Carolina.

Wake County election officials could not investigate the people who allegedly voted illegally until an “official or formal source” provided notification, according to Wake County Board of Elections Director Gary Sims, the Times reported. The elections board said it will be able to investigate if the Department of Justice provides information on individuals convicted of voter fraud or the indicted admit they are not citizens.

Logan Churchwell of the Public Interest Legal Foundation, an organization that focuses on election laws, said election officials need to be more proactive in stopping illegal voting. However, he said officials were in a tough position.

“Federal law did not anticipate this kind of fraud,” Churchwell told The Daily Caller News Foundation.

Officials in Wake County may not have the tools to fix the voter registration system or may be “hindered by outdated and increasingly bad laws,” he added.

The Public Interest Legal Foundation wrote in its study “Safe Spaces” that the 1993 National Voter Registration Act makes it easier for noncitizens to register to vote because there are no other verification systems required to be in place.

The National Voter Registration Act was an initiative to ease voter registration and maintenance, according to the DOJ. People could register to vote at the same time they applied or renewed driver’s licenses.

“If a noncitizen checks ‘Yes’ to the citizenship question in any setting, they are simply enrolled without any further verification, even if they presented a Green Card or foreign passport to identify themselves at the time of registration,” the Public Interest Legal Foundation study said.

The August 2018 study looked into noncitizen voting in 13 sanctuary cities and counties across the nation. Over 3,100 noncitizens were registered to vote or were taken off of voter rolls between 2006 and 2018.

Fairfax County in Virginia topped the list of noncitizens removed from voter rolls with 1,334 people.

The study also proposed that states check the citizenship status for new voter registrants through other state databases like a driver’s license customers list. Arizona and Virginia currently employ this system.

“This reform places no upfront burden on new registrants,” the study said.

The Public Interest Legal Foundation uncovered some of the indicted voters in North Carolina, according to the Times.

The 19 who were indicted could face a maximum fine of $350,000 and six years in prison, the U.S. Attorney’s Office for the Eastern District of North Carolina reported.

“The State Board of Elections and Ethics Enforcement is printing signs to be placed at all polling places and early voting sites in the 2018 general election with the goal of notifying individuals who are not eligible to vote before they cast ballots,” Patrick Gannon, public information officer for the North Carolina State Board of Elections and Ethics Enforcement, said in a statement to The Daily Caller News Foundation.

A spokesperson from the North Carolina Division of Motor Vehicles told The Daily Caller News Foundation the DMV does not register voters and that people apply to register to vote.