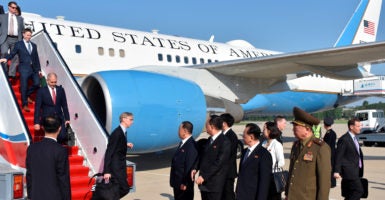 Kiron Skinner will succeed Brian Hook as director of policy planning for the State Department. Here, Hook steps off the bottom step as officials deplane May 9 in Pyongyang, North Korea, ahead of Secretary of State Mike Pompeo. (Photo: Matthew Lee/Reuters/Newscom)

The State Department is about to get a big brain.

Secretary of State Mike Pompeo named scholar and national security expert Kiron Skinner on Thursday as director of policy planning, the official who heads the department’s in-house think tank. It’s a signal that Pompeo is moving back to regular order in how State does business, but also that he is serious about implementing President Donald Trump’s “America First” national security strategy.

Skinner directs Carnegie Mellon University’s Institute for Policy and Strategy and also is the Taube professor of international relations and politics at the private research university in Pittsburgh. She is a research fellow at the California-based Hoover Institution.

Skinner replaces Brian Hook, who will be captaining implementation of the Trump administration’s pressure campaign on Iran. The Hook appointment makes sense because he has been State’s point man on Iran, and Iran is a top administration priority.

The shift, however, also signals a new phase in how the State Department does the business of state. Since the upper political ranks were so thin, the shop known as the Policy Planning Staff has been unusually operational over the past 17 months, leading negotiating and policymaking efforts that were normally done by senior diplomats.

Pleased to announce the appointment of Dr. Kiron Skinner as the incoming Director of Policy Planning. Dr. Skinner will provide strategic views on policy formulation. Her vision and expertise will be strong assets in the @StateDept’s work on behalf of the American people. pic.twitter.com/10B0sVs0BC

Pompeo has made filling out the senior diplomatic ranks a priority, using the Policy Planning Staff for the important work of thinking through how State will address the long-term challenges and the next steps in advancing Trump’s foreign policy.

What is most telling about the appointment of Skinner is that it is an unconventional choice. This shows how much Pompeo gets what will become the new conventions of this unconventional modern world.

Statecraft no longer can be stovepiped into the isolated world of embassies and meeting rooms. Modern diplomacy swims in a witch’s brew that is as much about the impact of new technologies such as artificial intelligence, blockchain, and the internet of things and great power strategic competitions as it is about negotiating treaties and consular affairs.

Skinner, 57, has led cutting-edge technology projects at major universities, served on the Defense Policy Board (which advises the Pentagon), and is as comfortable with generals and general managers as she is with diplomats. By picking her, Pompeo shows that he gets it.

Skinner is a good fit for Pompeo’s team. She is a big thinker. While she may be a less familiar name to folks in foreign policy circles, she is well known in the national security and tech policy communities. She will be a strong bridge between the converging world of all things online, security, and diplomacy.

Kiron Skinner on the #TrumpKimSummit: “I think the way this will play out is that the United States will remain firm… about what it wants.” pic.twitter.com/mP0A2iydRY

Skinner also is someone who will help bring together the tribes in the Trump administration. She is a well-known quantity and has long-standing connections in the conservative community.

She served on the presidential transition team. She definitely has the president’s confidence and a strong relationship with the national security adviser, John Bolton. She served as a foreign policy adviser on the campaigns of George W. Bush and Newt Gingrich. She is known to be close to former Secretary of State Condoleezza Rice.

In addition to a long string of academic credentials and experience working with government and the private sector, what is key about Skinner is that she understands Trump’s foreign policy. Early on she was one of the few academics to appreciate the popular power of the Trump message, including on foreign policy.

Writing in Forbes magazine about an emerging Trump doctrine four months before the 2016 election, Skinner pointed out:

Go beyond this rhetoric, however, and hear Trump’s explanation for America first: ‘The world is most peaceful and most prosperous when America is strongest. America will continue and continue forever to play the role of peacemaker. We will always help save lives and indeed humanity itself, but to play the role, we must make America strong again.’

Is there any country other than the United States that most Americans would like to see as the organizer of the international system?

In addition to his politically incorrect rhetoric, Trump seems so much like a foreign policy radical because he is tampering with long-held maxims. One such maxim is that China should not be taken on directly. Yet Trump says the United States cannot be strong militarily when it is weak economically, and its economic plight has a lot to do with China’s ‘assault on American jobs and wealth.’

Kiron Skinner on expulsion of 60 Russian diplomats: "It is the harshest action against the Russians under President #Trump." https://t.co/tjKuLoRujW pic.twitter.com/LP3NLkcVOE

With outstanding conservative and academic credentials, Skinner has the potential to help anchor the Trump foreign policy philosophically in the principles and worldview of President Ronald Reagan.

Reagan has been the subject of much of Skinner’s academic work at the Hoover Institution. With Annelise and Martin Anderson, she edited the best-selling book “Reagan In His Own Hand: The Writings of Ronald Reagan That Reveal His Revolutionary Vision for America” as well as “Reagan: A Life in Letters.” She co-wrote “The Strategy of Campaigning: Lessons From Ronald Reagan and Boris Yeltsin.”

Having somebody rooted in Reagan in the heart of Foggy Bottom ought to help keep Trump’s foreign policy headed in the right direction.