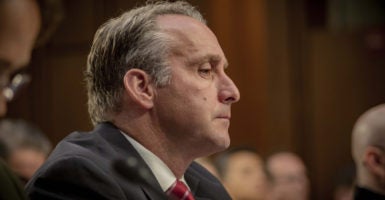 The second in command at U.S. Immigration and Customs Enforcement says he opposes a request by 19 regional supervisors to break the agency in two, with one focused on human smuggling and drug trafficking, and the other focused on removing illegal immigrants.

Matthew T. Albence, the agency’s acting deputy director, said the divisions of ICE—Enforcement and Removal Operations (ERO) and Homeland Security Investigations (HSI)—have “very complementary missions,” and he doesn’t think it would be wise to break them apart.

Albence is also the ICE executive associate director for enforcement and removal.

In a June letter to Homeland Security Secretary Kirstjen Nielsen, 19 special agents in charge with Homeland Security Investigations cited the politics surrounding so-called “sanctuary” jurisdictions and politics as getting in the way of their mission, which is unrelated to deporting illegal immigrants.

“HSl’s investigations have been perceived as targeting undocumented aliens, instead of the transnational criminal organizations that facilitate cross-border crimes impacting our communities and national security,” said the letter, first reported by the Texas Observer. It continues: “Many jurisdictions continue to refuse to work with HSI because of a perceived linkage to the politics of civil immigration.”

The letter also states: “The two ICE sub-agencies have become so specialized and independent that ICE’s mission can no longer be described as a singular synergistic mission; it can only be described as a combination of the two distinct missions.”

Albence, the ICE acting deputy director, told The Daily Signal this week at the White House that the proposed split would not be effective.

“I don’t think that’s a viable option. We have very complementary missions,” he said of the two divisions, enforcement/removal and transnational investigations.

“Much of what they do involves immigration enforcement,” he explained. “The human smuggling and trafficking investigations that they do, a lot of the border crime involves both these smuggling networks that are smuggling drugs and also smuggling people.

“These are transnational, which rely upon these criminal syndicates along the border, which Homeland Security Investigations does a tremendous job in targeting these organizations and taking them down and dismantling them,” Albence said.

Several Democratic lawmakers have called for abolishing ICE. The House last month adopted a resolution in supporting of ICE, but 167 Democrats refused to vote for it, with 34 opposing the resolution and 133 others abstaining by voting “present.” Only 18 voted in favor.

In fiscal 2017, Enforcement and Removal Operations made 143,470 arrests and deported 226,119 individuals, according to ICE. The arrests during fiscal 2017 included 127,000 illegal immigrants who were charged with or convicted of crimes inside the United States. More than 1,800 of those were homicides and 48,000 were assaults. ICE made 4,818 gang-related arrests.

Albence said it’s unfortunate that the HSI mission is being impeded by “sanctuary” jurisdictions, which he said prompted the 19 regional supervisors’ request.

“That was a response to a lot of these jurisdictions unfortunately choosing politics over public safety, and they don’t want to cooperate with us,” he said. “So, what it’s doing is making these law enforcement agencies that want to work with us unable to do so because these jurisdictions are prohibiting them from doing so.”