US Holds Talks With Chinese Officials as Trade War Looms 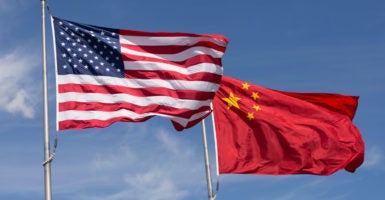 China’s Ministry of Commerce sent trade officials to Washington this week at the invitation of the United States.

This is a welcome respite from all the talk of a trade war between the two countries, but we are still far from an armistice.

While the talks between Chinese Vice Minister of Commerce Wang Shouwen and U.S. Treasury Undersecretary David Malpass are taking place Aug. 22 and 23, it will likely be too late to stop Customs and Border Protection from collecting taxes on $16 billion worth of imports from China starting on Aug. 23.

However, fruitful dialogue could pre-empt the tax on $200 billion worth of imports that could go into effect this fall.

Officials from both sides of the Pacific are likely taking a more sober approach to these trade talks.

High-level negotiations over the past year have proved fruitless. In May, the U.S. and China released a joint statement that put the trade dispute “on hold.” However, that lasted less than a month before President Donald Trump—much to Chinese officials’ confusion and dismay—announced plans to proceed with tariffs on $50 billion and potentially an additional $200 billion worth of imports from China.

It was Commerce Secretary Wilbur Ross that led a delegation to Beijing in June for futile negotiations. It’s U.S. Trade Representative Robert Lighthizer who is overseeing the ongoing taxes on $250 billion worth of imports from China.

Currently, Lighthizer also has his hands full trying to reach a deal over NAFTA. At the same time, the Office of the U.S. Trade Representative is in the middle of a six-day hearing, from as many as 370 witnesses, regarding the tariffs on $200 billion worth of Chinese imports.

So negotiations seem to fall on the Treasury Department, which has its own interesting role to play in the U.S.-China trade talks. But its role makes sense, given reports of “quiet conversations” between Treasury Secretary Steven Mnuchin and Beijing.

While the two sides will be discussing outstanding economic and trade issues, it has been a recent drop in the value of China’s currency that has caught the eye of a number of analysts. The devaluing of the yuan, aside from China’s retaliatory tariffs, is possibly the reason Trump decided to increase the tax on $200 billion in imports from 10 percent to 25 percent.

It’s Treasury’s role to identify whether China is actively manipulating its currency.

But as it has done over the past couple of years, the Treasury is again unlikely to label China a currency manipulator. That’s because both the U.S. dollar and Chinese yuan are respectively overvalued by real exchange measures. China is simply letting the currency naturally devalue in the wake of a stagnating economy and the trade war.

So, while currency issues are on everyone’s mind, and analysts should remain focused on what’s really driving currency valuation, that should take a back seat to talks about real reform and ending the trade war.

A Right Approach to Talks

It’s a good sign that Treasury, led by Malpass, is engaging with China’s Ministry of Commerce. It’s even better, for a potential deal to be struck, that they’re doing it at a more operational level.

While the current talks won’t bring the trade war to an armistice, at least they’re a step in the right direction by this administration.