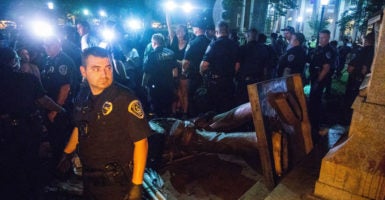 Police surround the toppled remains of a Confederate statue on Aug. 20, 2018, at UNC-Chapel Hill in Chapel Hill, North Carolina. Demonstrators surrounded and obscured the statue with large banners before toppling it. (Photo: Travis Long/TNS/Newscom)

“Campus leadership is in collaboration with campus police, who are pulling together a timeline of the events, reviewing video evidence, and conducting interviews that will inform a full criminal investigation,” UNC System Board Chairman Harry Smith and UNC System President Margaret Spellings said in a statement Tuesday, adding:

The safety and security of our students, faculty, and staff are paramount. And the actions last evening were unacceptable, dangerous, and incomprehensible. We are a nation of laws—and mob rule and the intentional destruction of public property will not be tolerated.

“Around 9:20 p.m. Monday night, a group from among an estimated crowd of 250 protesters brought down the Confederate Monument on the campus of the University of North Carolina at Chapel Hill,” UNC Chapel Hill said in an official statement in an email to The Daily Signal.

The statue of the Confederate soldier is known as Silent Sam.

One person has been arrested for “concealing one’s face during a public rally and resisting arrest,” according to Jeni Cook, a spokesperson for the Office of University Communications.

An article on the University of North Carolina’s grad school website describes the statue this way:

Erected in 1913, in remembrance of ‘the sons of the University who died for their beloved Southland 1861-1865,’ the Confederate monument known as Silent Sam stands on McCorkle place, the University’s upper quad, facing Franklin Street. The monument was given to the University by the United Daughters of the Confederacy in 1909. More than 1000 University men fought in the Civil War. At least 40 percent of the students enlisted, a record not equaled by any other institution, North or South. Sam is silent because he carries no ammunition and cannot fire his gun.

“Last night’s actions were dangerous, and we are very fortunate that no one was injured,” the university’s statement continued. “We are investigating the vandalism and assessing the full extent of the damage.”

The statue toppling is meant to be “smashing white supremacy” at UNC, according to Maya Little, who is charged with vandalism for an April protest and also faces an Honor Court hearing. Little’s remarks were reported by the Associated Press.