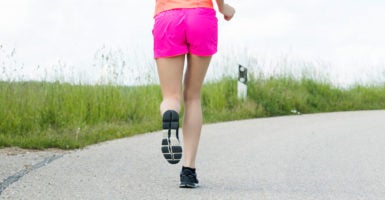 Mollie Tibbetts, not pictured, was last seen out on a jog in July. (Photo: Roman Märzinger/Westend61 GmbH/Newscom)

Police charged Cristhian Bahena Rivera, 24, with first-degree murder. The Los Angeles Times reported: “Rick Rahn, special agent in charge with the Iowa Division of Criminal Investigation, said … Rivera had been living in the area for four to seven years.”

President Donald Trump spoke about the case Tuesday night during an appearance in Charleston, West Virginia.

“You heard about today with the illegal alien coming in very sadly from Mexico, and you saw what happened to that incredible, beautiful, young woman,” Trump said. “It should’ve never happened. Illegally in our country. We’ve had a huge impact, but the immigration laws are so bad. But we’re getting them changed.”

Shawn Neudauer, a spokesperson for U.S. Immigration and Customs Enforcement, told BuzzFeed News that the agency had “lodged a detainer with the Poweshiek County Sheriff’s Office” on Rivera, identified as “an illegal alien from Mexico,” after his arrest on the murder charge.

Tibbetts, 20, went missing after going for a jog July 18 in the town of Brooklyn. Authorities searched for more than 30 days, interviewing around 1,500 people.

According to the affidavit filed with the arrest warrant, Rivera “admitted to making contact with a female running in Brooklyn” and then pursued her in his vehicle, before leaving his vehicle and running after her.

Rivera stated she grabbed her phone and said ‘[I’m] gonna call the police.’ Rivera said he then panicked and got mad and he then ‘blocked’ his ‘memory’ … The defendant further described during the interview that he dragged Tibbetts on foot from his vehicle to a secluded location in a corn field.

As Iowans, we are heartbroken, and we are angry. We are angry that a broken immigration system allowed a predator like this to live in our community, and we will do all we can bring justice to Mollie’s killer.

The report of an illegal immigrant murderer comes amid debate about abolishing Immigration and Customs Enforcement, the agency responsible for enforcing immigration laws in the interior of the country.

After a White House ceremony Monday, Matthew T. Albence, the agency’s executive associate director for enforcement and removal, warned that would not be a wise move.

“If you abolished ICE, and removed the whole interior enforcement arm of immigration enforcement, you will have created the greatest pull factor this country has ever seen,” Albence, also the acting deputy director of ICE, told The Daily Signal during an interview at the White House.

Individuals south of the border will know that as long as they keep trying and keep trying to get past the border patrol, that there is no possibility that they will ever be arrested, even if they get arrested for criminal violation in this country, that there is no possibility they will ever be arrested by immigration and by ICE. Without that deterrent effect, you will have rampant crime throughout our communities.

Heartbroken by the news about Mollie Tibbetts. Mollie was an amazing young woman and we are praying for her parents, brothers & friends in this time of unimaginable grief…. https://t.co/JesB2VXjnN