The Government May Require Almond Milk, Soy Milk to Use Non-Milk Names 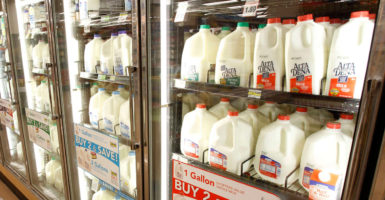 Dairy milk consumption has slumped gradually since the 1970s and precipitously over the past five years. (Photo: Mario Anzuoni/Reuters/Newscom)

If Washington politicians, bureaucrats, and lobbyists have their way, consumers of common nondairy “milks”—such as almond milk and soy milk—may soon have to buy those products under obscure labeling such as “plant juice” and “tree-nut beverage.”

In another unfortunate instance of overcriminalization, after efforts to make it a crime to label nondairy products as “milk” stalled in the Senate, the Food and Drug Administration may now be trying to do through regulatory means what Congress has been unwilling or unable to do through legislation.

That’s an utter shame—pun intended—especially for an administration otherwise committed to sensible deregulation.

That would make it a federal crime to use the term “milk” on the label of any beverage not derived from “lacteal secretion … obtained by the complete milking of one or more hooved mammals.”

The bill’s main premise is that plant-based products labeled as “milk” mislead the average American into thinking that it either comes from cows or has the same nutritional content as a cow’s milk.

It also suggests that American consumers cannot read and understand nutrition facts labels and distinguish between goods derived from plants versus hooved mammals.

Well, changing consumer preferences provide another backstory: Dairy milk consumption has slumped gradually since the 1970s and precipitously over the past five years, while almond milk sales surged 250 percent.

According to Hank Cardello, a senior fellow at the Hudson Institute, the dairy milk industry is “in trouble because it has focused on cows instead of consumers.” But big dairy has also focused on lobbying in Washington, and since Congress creates new crimes like drunken sailors spend on shore leave, could it now be trying to criminalize the competition?

Today, the U.S. Code contains a literal A-to-Y list of misbranding offenses. The DAIRY PRIDE Act would, if enacted, complete that alphabet of horribles by adding a section (Z) for nondairy products labeled as “milk.”

Misbranding food is punishable with fines up to $1,000 and imprisonment up to one year, or up to $10,000 and three years, or both, if the government can prove that a defendant acted with intent to defraud or mislead consumers.

And the FDA does define “milk” as “lacteal secretion, practically free from colostrum, obtained by the complete milking of one or more healthy cows.” It tries to protect the public from misleading labels, but enforcement can become overzealous.

For example, Karen and Randy Sowers had to sue the FDA because its regulations make it a federal crime for dairy farmers like them to label their all-natural skim milk as “skim milk,” instead of the FDA’s preferred term, “imitation milk product.”

Fortunately, federal courts have fairly applied the law on behalf of American consumers and refused to say that nondairy products are misleading just because their labels say “milk.”

In one case, Ang v. Whitewave Foods Company (2013), individuals sued several food and beverage companies in federal district court in California arguing in part that labels like “almond milk” and “soymilk” mislead consumers, do not comply with the FDA’s definition of “milk,” and should be prohibited.

In rejecting this claim, Judge Samuel Conti of the U.S. District Court for the Northern District of California held that’s “simply not plausible.”

Conti recalled a similar lawsuit where plaintiffs alleged that the name and vaguely berry-shaped pieces in Cap’n Crunch’s Crunch Berry breakfast cereal duped consumers into thinking that it contained real fruit, which the court described as “nonsense” because the term and images of “crunch berries” didn’t “even remotely resemble any naturally occurring fruit of any kind.”

In the plant-based “milk” case, Conti wrote that the plaintiffs’ claims were just as “highly improbable” and “stretched the bounds of credulity,” because by the same logic, “a reasonable consumer might also believe that veggie bacon contains pork, that flourless chocolate cake contains flour, or that e-books are made out of paper.”

Reasonable consumers, Conti wrote, simply do not “view the terms ‘soymilk’ and ‘almond milk,’ disregard the first words in the names, and assume that the beverages came from cows.”

In a similar federal lawsuit in California in 2015, Judge Vince Chhabria, also of the U.S. District Court for the Northern District of California, likewise rejected allegations that consumers were misled by nondairy “milks” because a “reasonable consumer (indeed, even the least sophisticated consumer) does not think soymilk comes from a cow.”

It seems that enough lawmakers agree with the bipartisan thinking of Conti and Chhabria—appointees of Presidents Richard Nixon and Barack Obama, respectively—because the DAIRY PRIDE Act has stalled in the Senate.

Recently, however, FDA Commissioner Scott Gottlieb announced that the agency will issue a guidance document within a year or two and begin to enforce its definition of milk against nondairy “milk” producers.

Not only is that misguided, as Conti and Chhabria held, it is antithetical to the progress that the Trump administration has made on regulatory reform.

Sen. Mike Lee, R-Utah, attempted to block Gottlieb’s plan, but the Senate voted 84-14 to let the agency do the dirty work that Congress could not do itself.

“No one buys almond milk under the false allusion that it came from a cow,” Lee said. “They buy it because it didn’t come from a cow. Consumers are not deceived by these labels.”

Unfortunately, that determination now lies with unelected bureaucrats who seem all too eager to pick winners and losers in the milk aisle by selectively enforcing outmoded regulations.

Gottlieb has raised potential public health risks to justify moving forward, based on studies showing the risks of rickets from Vitamin D deficiency and extreme protein deficiency among young children who are given a steady diet of plant-based, rather than dairy-based, beverages.

But even assuming that’s true, Americans do not need costly, taxpayer-funded studies and regulations to guide them down the milk aisle.

Of course, consumers can also perform simple and quick online searches to access a plethora of articles comparing nutritional values of dairy milk and plant-based alternatives.

Another guidance document is unlikely to change consumer preferences and behaviors, but it will further erode the rule of law.

As Lee warned, if overzealously enforced, labeling regulations can “play right into the hands of the large, cronyist food industries that want to place new, innovative products at a disadvantage.”

Those regulations may be easier to milk out of unelected bureaucrats than members of Congress—who have to explain their actions to voters—but that does not make them any less sour.