A Conservative Woman Just Broke New Ground, but the Media Is Nowhere to Be Found 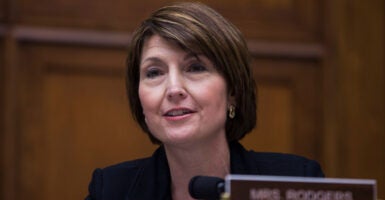 Ever since Joe Biden became our nation’s presumptive next president, the media has been bending over backward to celebrate historic “firsts” for women.

Certainly, women deserve credit for breaking glass ceilings and rising to powerful positions. Therefore, we should also be able to expect that when the first female from either political party lands the powerful role of leading the House Energy and Commerce Committee, the media would celebrate it, right?

In an era of progressive privilege, not if she’s a Republican. On Wednesday, the Republican Steering Committee selected Rep. Cathy McMorris Rodgers, R-Wash., to become the ranking member on the House Energy and Commerce Committee.

This means McMorris Rodgers will lead one of the most influential committees in Congress with jurisdiction over health care, the energy sector, and Big Tech.

Many of the major decisions Congress makes for our country originate here. It is the oldest continuously standing committee in the House, and has never had a female from either party at its helm—until now.

McMorris Rodgers is one of the most level-headed, down-to-earth members of Congress. She grew up in eastern Washington working on an orchard, at a fruit stand, and helping her family’s small business. It’s there that she learned the value of hard work.

She’ll describe herself not as one of the most powerful members of Congress, but as a leader, hardworking mom of three children, and an ability advocate for people with disabilities, like her son.

So far, there’s been no splashy breaking news alerts about this historic “first,” outside of a couple passing mentions in Beltway publications such as Politico and Bloomberg Law. Perhaps that’s because conservatives don’t believe in gender or diversity quotas—or because of the double standard they face in the media.

In Politico’s coverage, McMorris Rodgers said gender wasn’t a discussion in the competitive race—being elected as the first woman was “just the cherry on top.”

McMorris Rodgers is well equipped to head this powerful committee. As its leader, she plans to both stand up to the progressive “Squad,” but will also work to find middle ground with progressives when it makes sense, such as fighting the coronavirus and working on privacy issues.

On climate change, she has supported free-market innovation policies, recently writing in FoxNews.com:

The climate is changing. Humans and global industrial activity are contributing. Thankfully, there are realistic free market solutions that will lead us in the right direction. Solutions like [cross-laminated timber] and hydropower are already here, and there are more innovations to come that will ensure America leads on clean energy, creating jobs, keeping energy prices affordable, and reducing carbon emissions. …

This is a global problem, and it requires both parties leading on a global solution. America led the world in the development of coal, oil and gas, and now we can lead the world in clean energy technology.

On health care, McMorris Rodgers wants affordable, patient-centered reforms. She co-chairs the Rural Health Caucus to fight for more affordable and quality health care services in rural communities. She signed the Patient Protection Pledge, a promise to stand with patients and their right to know the cost of health care services upfront.

As a champion for persons with disabilities, she continues to advocate for her son, Cole, who has Down syndrome, and others like him.

McMorris Rodgers led efforts to ensure that the Tax Cuts and Jobs Act of 2017 was written with families who have children with disabilities in mind. Key provisions of her “ABLE 2.0” legislative package that became law empower people with disabilities to save more of their hard-earned dollars and to secure a job with dignity and purpose.

Many of McMorris Rodgers’s colleagues said she’s earned this position based on her unique qualifications and experience as a leader on solutions that restore hope in the promise of America. That promise is needed today more than ever, and it’s encouraging to now see it piloted by someone who encourages women to reach new heights by being true to themselves and their values.

She might not receive or even want the splashy treatment a progressive woman would get for earning the same role, but McMorris Rodgers will continue to lead with courage, conviction, and compromise when it makes sense.

According to her office, after the Energy and Commerce Committee voted to approve her as ranking member, a number of Democratic women took the time to personally congratulate McMorris Rodgers for her historic achievement on the House floor. Their quiet acknowledgement is proof that all women can and should be celebrated, even if we don’t always agree.