The Brand Memorandum: The Justice Department Reaffirms Its Commitment to the Rule of Law 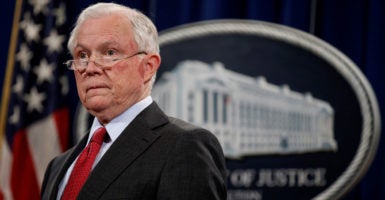 It is common for agencies to issue a variety of document—generically termed “guidance documents”—to inform the public how the agency interprets the law. That is all well and good. There are a bazillion statutes and regulations–to steal a phrase, “they outnumber the grains of sand on the beach.”

Anything that agencies can do to help tell the public what laws the federal government has adopted, and how it reads them, is to our benefit.  In fact, Sen. Ron Johnson, R-Wis.  recently introduced a bill—the Guidance Out of Darkness (or GOOD) Act, S. 2296—that would require agencies to post on their websites every guidance document they adopt.  If that bill were to become law, it would take a step in the right direction because it would help tell the public the rules of the road.

But we do not have to wait for Congress to pass legislation to see an improvement in this field.

On Jan. 25, Associate Attorney General Rachel Brand did the nation a solid by issuing a memorandum—soon to be known as the “Brand Memorandum”—preventing Justice Department lawyers from treating agency guidance documents as law when the government brings a civil enforcement action in court against a private party.

The Brand Memorandum is a valuable improvement in administrative law and helps to return us to a government under the rule of law.

The Brand Memorandum implements a memorandum issue by Attorney General Jeff Sessions in November 2017.  Sessions prohibited Justice Department officials from issuing memoranda that purport to be law by creating rights or obligations on parties outside of the executive branch. Aware that department officials had followed that practice in the past,  Sessions decided that the matter needed to be addressed at the cabinet level.  He explained that Justice Department officers will issue guidance documents explaining the department’s interpretation of a law or the factors that officials consider when deciding whether to bring an enforcement action.  But guidance documents do not undergo the notice-and-comment process established by the Administrative Procedure Act, he noted, and therefore cannot create rights or impose duties on members of the public.  Sessions therefore prohibited department officials from attempting to treat non-binding advice as if it were law.

In doing so, the attorney general brought Justice Department policy in line with the Article I lawmaking process (specifically, the bicameralism and presentment requirements), the Article III adjudicatory process, the Fifth Amendment Due Process Clause, and the Administrative Procedure Act.

The new Brand Memorandum carries the Sessions memorandum one step further.  Brand concluded that the principles stated in the Sessions Memorandum must also guide Justice Department lawyers when they bring what she termed “affirmative civil enforcement” lawsuits against private parties. In those actions, she wrote, “the Department may not use its enforcement authority to effectively convert agency guidance documents into binding rules.” The Brand memorandum directive is “effective immediately” for all civil enforcement lawsuits.

The Sessions and Brand Memoranda are a welcome “About face!” from the Justice Department’s practices during the Obama administration.

Under Attorneys General Eric Holder and Loretta Lynch, the department treated such agenda memoranda as if they were the Decalogue. In connection with the Education Department’s transgender bathroom policy, for example, the Obama administration played the role of Judge Dredd, arguing that its interpretation of the law was the law even though the Supreme Court had explicitly rejected that proposition more than 30 years ago in Mitchell v. Forsyth (if not more than 200 years ago in Marbury v. Madison).  The position taken by the Trump Justice Department signals a return to a belief in governance by and under the law, a principle that has been a part of the Anglo-American legal tradition for more than 800 years.

As good as the Sessions and Brand Memoranda are, there is still room for improvement.  The Sessions Memorandum is limited to guidance documents issued by the Justice Department itself.  The Brand Memorandum is limited to guidance documents issued by agencies in connection with lawsuits brought by the Justice Department against a private party.  The final leg of the stool consists of lawsuits brought by a private party against an agency in which the agency seeks to defend its action on the basis of an agency guidance document.  The principles discussed in the Sessions and Brand Memoranda, however, are no less applicable in that third scenario than they are in the ones that the memoranda discuss.  An agency guidance document cannot be deemed a law unless the agency has satisfied the Administrative Procedure Act notice-and-comment process to create a rule with the force and effect of law.  The dispositive question is whether the guidance document passed that process.  It is irrelevant whether the government is a plaintiff or a defendant in a lawsuit.

The result is that we are likely to see a third Justice Department memorandum sometime in the future saying that department lawyers cannot treat such documents as law when they defend a client agency in court.  The Constitution and the Administrative Procedure Act—to say nothing of logical consistency—demands that result.