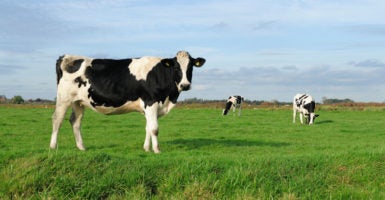 Forget narcotics. Uncle Sam has a new substance to crack down on: all-natural skim milk.

Food and Drug Administration regulations make it a federal crime for dairy farmers to call all-natural skim milk exactly what it is—skim milk. Instead, the FDA demands that farmers label additive-free skim milk as “imitation milk product,” because, in the FDA’s mind, skim milk just isn’t the real thing.

The FDA’s finicky rules are not going unchallenged, however. Attorneys with the Institute for Justice are challenging those rules on behalf of a dairy farmer, Randy Sowers, who wants to sell all-natural products and label them honestly, without the threat of fines or imprisonment.

Randy and Karen Sowers founded their South Mountain Creamery in Maryland on rented land back in 1981. They took out a loan and bought 100 cows. Today, three generations of Sowers work on their family’s 2,200 acre farm. They have more than 600 cattle, plus 16,000 chickens. Their family employs more than 75 people.

They also believe in keeping their products additive-free.

Naturally, they would like to sell skim milk with only one ingredient: milk, having skimmed off the cream that rises to the top. Voila, skim milk.

Randy Sowers wants to sell his milk in Pennsylvania, which is no problem under Pennsylvania law.

But under FDA regulations, in order for him to sell skim milk across state lines with an honest label (“skim milk”), it needs to have some dishonest additives: artificial vitamins A and D, in amounts set by federal regulation.

Without those additives, the FDA requires Sowers to call his product “imitation skim milk” or “imitation milk product.”

Who even knows what that is? And more importantly, who would buy it?

The FDA’s reasoning is that injecting artificial vitamins replaces natural ones that get lost in the process of skimming off cream. The FDA argues that without those additives, the public would be misled into buying a nutritionally inferior product masquerading as milk.

Never mind that fats are nutrients, and skim milk has been marketed as having less fat than whole milk for over 70 years. Virtually everyone who buys skim milk knows it is nutritionally inferior to whole milk.

And it turns out that many of the required additives are valueless to consumers. Because the injected vitamins A and D are fat-soluble, they tend to dissipate in low-fat skim milk.

So, by requiring dairy farmers to list the artificial vitamins on their nutrition labels, the only party that is misleading consumers is the government.

This will not be the first time that the Sowers have challenged the federal government. In 2012, federal agents seized the money in their bank account alleging that they had committed the crime of “structuring”: withdrawing or depositing cash in sums of less than $10,000 in order to evade reporting laws.

The couple had just been depositing the cash they earned at weekend farmers markets. So, they fought back until the money was returned, four years later.

Now, they are challenging the FDA’s regulatory ban on honest labelling in federal court. They contend that the government has no legitimate interest “in forcing pure, safe, lawful skim milk to be labeled as an ‘imitation,’” in violation of the First Amendment.

The Institute for Justice has already won a similar case in Florida.

Wesselhoeft challenged Florida’s requirement under the First Amendment and lost at the federal district court level. But a panel of the 11th U.S. Circuit Court of Appeals unanimously ruled for her, finding that the First Amendment protects her right to call her skim milk what it is, no matter what the government wants to call it.

The Supreme Court recognized that the First Amendment protects “the informational function of advertising,” but held that the government may still “ban forms of communication more likely to deceive the public than to inform it.”

“If the communication is neither misleading nor related to unlawful activity,” the court continued, “the government’s power is more circumscribed.”

Under Central Hudson, restrictions on what a company can lawfully, honestly convey to potential consumers must be no more restrictive than necessary to directly advance a substantial state interest.

According to 11th Circuit Judge Susan Black’s opinion, Wesselhoeft’s case fell on the right side of that equation, because there is nothing unlawful, false, or inherently misleading about calling skim milk what it is.

The state had argued that any use of a state-defined term that is “inconsistent with the state’s preferred definition is inherently misleading.”

“All a state would need to do in order to regulate speech,” Black wrote, “would be to redefine the pertinent language in accordance with its regulatory goals.”

Florida tried to support its position with a study in which consumers “indicated they would ‘expect skim milk to include the same vitamin content as whole milk.’”

But what a consumer believes about skim milk’s vitamin content, Black wrote, “does not make the creamery’s representation that it is selling skim milk misleading; ‘[u]nfamiliarity is not synonymous with misinformation.’”

Now, Sowers is challenging the FDA’s use of the same kind of newspeak.

If Randy and Karen Sowers want to use the term “skim milk” exactly as it is defined in common dictionaries such as Merriam-Webster, then under current federal law, they may end up paying a price: up to one year in prison and up to $1,000 in fines, or both, per violation.

The court should follow Black’s reasoning in the Ocheesee Creamery case and side with Randy Sowers and Noah Webster, not the FDA and Big Brother.