IRS to Return $30K It Seized From Maryland Dairy Farmers 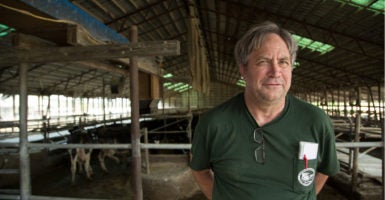 In 2012, the federal government forfeited $29,500 from Frederick County, Maryland, dairy farmer Randy Sowers. Today, after a four-year fight to get his money back, the IRS is returning Sowers' money. (Photo: Institute for Justice)

After more than four years, two congressional hearings, and countless pleas to the IRS and Justice Department, Randy Sowers’ fight with the federal government is finally coming to a close.

The Internal Revenue Service is returning the $29,500 it took from the Frederick County, Maryland, dairy farmer, ending his long journey through the civil asset forfeiture system.

“When you’re in kindergarten, you learn that if you’ve taken something that doesn’t belong to you, you have to give it back,” Rob Johnson, a lawyer with the Institute for Justice who represented Sowers, told The Daily Signal. “In this case, the IRS has taken money that didn’t belong to them. We asked the IRS to do the right thing and give the money back, and now they have.”

Sowers’ saga began in February 2012, when IRS agents went to the dairy farm he runs with his wife, Karen, and told Sowers that the tax agency had seized their farm’s bank account.

According to the IRS, the Sowerses were making consistent cash deposits of just under $10,000. Agents said the Maryland couple had been “structuring” cash transactions to evade bank reporting requirements.

But Sowers and his wife frequently sold their eggs and milk at weekend farmers markets, and because many of their customers paid in cash, they often deposited cash into their bank account.

A bank teller previously told Karen Sowers that any deposits or withdrawals of more than $10,000 meant the bank had to fill out extra paperwork, so the couple decided to keep their deposits under that amount.

Under federal law, intentionally structuring cash transactions to avoid reporting requirements is illegal. And under civil asset forfeiture laws—a subset of which govern cash transactions and were designed to prevent money laundering and drug trafficking—the government was able to seize the couple’s money.

Civil asset forfeiture is a tool that gives law enforcement the power to take cash, cars, and other property that  investigators suspect is tied to a crime.

Sowers and his lawyers attempted to negotiate with the government, hoping to have most of the couple’s money returned. But those negotiations soured after the Frederick County farmer spoke with a reporter from Baltimore City Paper about his experience.

The day City Paper published its article featuring Sowers, Stefan Cassella, the assistant U.S. attorney handling the case, emailed the family’s lawyer saying the two parties had a “problem” because Sowers had spoken to the press.

As a result, Cassella said, prosecutors told the Sowerses they would have to forfeit $29,500 to the government—nearly half of what initially was seized.

The couple never was charged with a crime.

Last year, three years after Randy and Karen Sowers settled with the federal government, the Institute for Justice filed a petition for remission or mitigation on behalf of the Maryland dairy farmers and North Carolina convenience store owner Ken Quran, from whom the IRS seized $153,907 in 2014.

If granted, the petitions, akin to requests for a presidential pardon, allowed the federal government to return money to property owners after a civil forfeiture is completed, if it would advance the interest of justice.

The Justice Department returned Quran’s money in February, and today, Sowers is supposed to get his $29,500 back.

The Institute for Justice was the first to use petitions for remission or mitigation for closed cases of civil asset forfeiture. Now that the petitions have proven to be a successful means of prompting the return of money wrongfully seized by the government, Johnson said he is hopeful the Justice Department and IRS will help other civil forfeiture victims.

“The question was whether the Justice Department would agree to give money back when you had a settlement negotiated by the parties’ lawyers at the time of the forfeiture,” he said, adding:

Importantly, the DOJ has indicated it is willing to give back money in cases like Randy’s. In some ways, that makes Randy’s case an even more important precedent because it indicates that the DOJ is willing to open an even broader number of cases.

The Sowers case was widely covered by the media, and the dairy farmer testified twice before the House Ways and Means Oversight Subcommittee, where lawmakers on both sides of the aisle urged the IRS to right its wrong.

“It’s never too late to do the right thing,”  Rep. Peter Roskam, R-Ill., who chairs the subcommittee, said in a statement to The Daily Signal, adding:

I’m glad the IRS stepped up and finally gave Randy Sowers his money back. His case was an affront to justice and the government can never truly compensate him for the ordeal it put him through. I only hope he can take comfort in the knowledge that his bravery and willingness to testify in front of Congress will ensure more American families do not suffer the same indignity.

Johnson conceded that the IRS didn’t have to return Sowers’ money, but he believes the attention the case received played a role in the tax agency’s decision.

“The IRS didn’t have to give this money back,” Johnson said, “and the reason they’ve agreed to do it is they’ve been publicly shamed into doing it.”

Many other cases have arisen in recent years in which law enforcement seized money from innocent property owners for structuring violations. Many of those people were, like Sowers, never charged with any other offense.

In response to the backlash, both the IRS and Justice Department changed their respective policies involving structuring cases.

Under the new policy, the agencies only pursue such cases if they know the money is connected to illegal activity.

To reflect the internal changes, the IRS announced earlier this month that it will send letters to everyone the agency seized money from for structuring violations over the past six years, notifying them that they may be entitled to get their property back.

The IRS identified 700 cases where persons’ money wouldn’t have been taken under the new policy. Those involved now can file petitions for remission or mitigation with the tax agency.