On Kavanaugh and Health Coverage: The Sky Is Not Falling 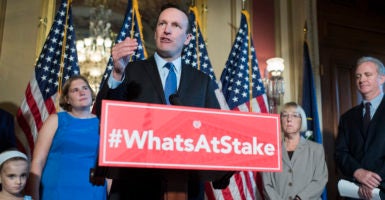 It’s been about five weeks since President Donald Trump announced his nomination of Brett Kavanaugh to the Supreme Court. Ever since, Trump’s opponents have been throwing a lot of spaghetti at the wall, trying to find some negative argument or way of framing this nomination that will get some traction.

We’re past the silly season when opponents took issue with Kavanaugh’s passion for baseball, or offered the false claim that he believes that presidents should be “above the law.’”

One claim they continue to advance, though, is that the appointment of Kavanaugh, who sits on the U.S. Court of Appeals for the District of Columbia Circuit, would threaten the Affordable Care Act and its protections for individuals with pre-existing medical conditions. This claim also should be rejected.

Sen. Chris Murphy, D-Conn., claims that Kavanaugh’s nomination was “critical to this continued campaign of trying to undermine the Affordable Care Act.” A liberal organization, Save SCOTUS, insists that “a vote for Brett Kavanaugh is a vote to roll back the progress we’ve made on access to health care.”

Let’s look specifically at the claims by Demand Justice, a liberal group recently created solely for the purpose of blocking Trump’s judicial nominees. In one ad, the group says that “Kavanaugh refused to uphold key health care protections” and, if confirmed, “could vote to end these protections for good.”

These assertions take advantage of the public’s lack of knowledge about our system of government to misrepresent what courts and judges do.

Forty percent of Americans cannot name any rights protected by the First Amendment, and one-third cannot name any branch of government. Kavanaugh’s opponents are only deepening this misunderstanding by these claims about health care.

The claim that Kavanaugh “refused to uphold key health care protections” apparently relates to his dissenting opinion in Seven-Sky v. Holder (2011), which challenged the constitutionality of Obamacare’s mandate that individuals purchase government-approved health insurance. Characterizing this mandate as a “key health care protection” stretches the meaning of that phrase to the breaking point.

But the claim is false because Kavanaugh expressed no opinion about the mandate’s constitutionality.

Instead, he wrote that a federal statute, the Anti-Injunction Act, made the legal challenge premature. That statute prohibits lawsuits challenging taxes until those taxes have been collected. Kavanaugh concluded that this statute applied to the Obamacare mandate because its penalty was imposed and collected the same way as other taxes.

Kavanaugh’s opponents turn his position that the lawsuit was premature into the claim that he “refused to uphold key health care protections.” That transformation, however, requires ignoring what the judge actually wrote.

Perhaps anticipating distortions like those being trafficked by Demand Justice, Kavanaugh wrote that he did “not take a position here on whether the statute as currently written is justifiable.”

The group’s second claim fares no better, similarly misrepresenting how the judiciary addresses such issues.

No one thinks it likely that the Supreme Court would consider another constitutional challenge to Obamacare. Even if it did, though, the majority that upheld it in 2012 is still on the court, and Kavanaugh will replace Justice Anthony Kennedy, who voted to strike down the health care law.

The more egregious error is the patently false claim that the Supreme Court—no matter who serves on it—could vote to end health care protections “for good.” Congress has authority to legislate; the courts only make sure that Congress exercises that authority within the rules set by the Constitution.

The president’s appointment of a Supreme Court justice is a significant process, a chance for the American people to learn more about their system of government and the role that judges were designed to play.

Misrepresenting the judiciary’s work, and distorting the record of this nominee, only undermines that opportunity.