Ocasio-Cortez Calls for Impeaching Kavanaugh, but Top House Democrat Says It’s Off the Table for Now 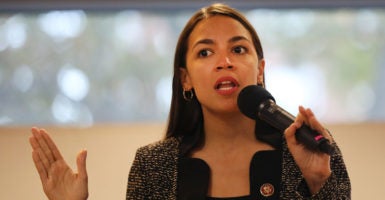 "Sexual assault isn’t a crime of passion--it’s about the abuse of power. He must be impeached," says Rep. Ocasio-Cortez about Justice Kavanaugh. (Photo: Spencer Platt/Getty Images))

Rep. Alexandria Occasio-Cortez is calling for the impeachment of Supreme Court Justice Brett Kavanaugh and accusing him of lying under oath.

“It is unsurprising that Kavanaugh, credibly accused of sexual assault, would lie under oath to secure a Supreme Court seat,” the Democrat congresswoman, who represents a New York district, tweeted Monday. “Sexual assault isn’t a crime of passion–it’s about the abuse of power. He must be impeached.”

House Judiciary Committee Chairman Jerry Nadler, D-N.Y., said that a Kavanaugh impeachment will not be a focus in the near term.

“We have our hands full with impeaching the president right now and that’s going to take up our limited resources and time for a while,” Nadler told WNYC in an interview Monday, per Politico.

“The latest attacks leveled against Brett Kavanaugh are beyond the pale,” Graham added. “My heart goes out to Justice Kavanaugh’s family for being forced to endure this ridiculous treatment once again.”

Ocasio-Cortez’s demand comes after a New York Times article claimed Kavanaugh attended an alcohol-fueled dorm party in college where Kavanaugh’s friends “pushed his penis into the hand of a female student.”

On Sunday, the New York Times added an editor’s note stating that “the female student declined to be interviewed and friends say that she does not recall the incident.”

Along with the text of her post, Occasio-Cortez provided footage of a previous speech she made against Kavanaugh.

“People like Anita Hill and Dr. [Christine Blasey] Ford have to sit there in view of panels of eleven men,” she said in the video. “Could you imagine if Brett Kavanaugh had to sit in front of a panel of eleven women of color, deciding his fate? Could you imagine?”